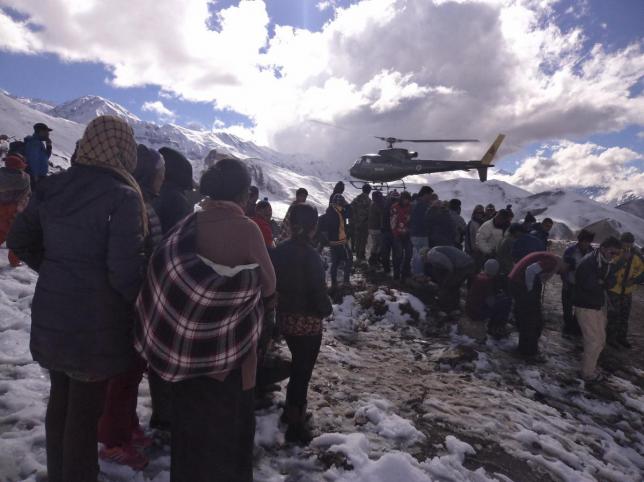 People gather near a helicopter belonging to Nepal Army used to rescue avalanche victims at Thorang-La in Annapurna Region in this October 15, 2014 handout photo provided by Nepal Army. REUTERS
KATHMANDU: The most popular trekking trail in Nepal escaped damage during April's devastating earthquake and is safe for hikers to return, an assessment team said Thursday. Kit Miyamoto of the California-based engineering firm Miyamoto International assessed the 200 kilometers (125 miles) of trekking trails around Mount Annapurna, and said that the only hazards were found at three spots and appeared to predate the quake. Only about 3 percent of the accommodations on the trail were damaged by the April 25 earthquake. That quake, coupled with another in May, killed 8,898 people. Nepal is hoping visitors will return in September, when tourist season begins. Tulsi Prasad Gautam of Nepal's Tourism Department said the assessment would help bring back trekkers, and it would be easier for them to get travel insurance — a major concern for people planning their trip to Nepal. The trail around Mount Annapurna gets about 115,000 foreign trekkers, which is about 60 percent of all hikers who travel to Nepal every year. The team is also assessing the route on the foothills of Mount Everest, and expects to complete work in two weeks.
#Nepal trekking #Nepal tourism #Annapurna #Annapurna circuit #Nepal quake #Nepal hiking
You May Also like: