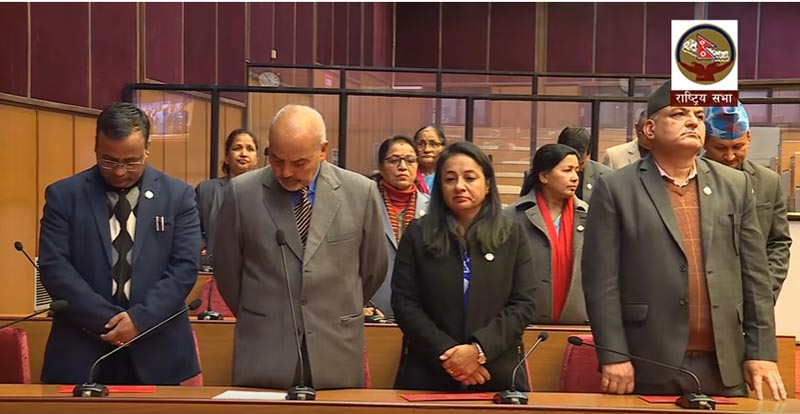 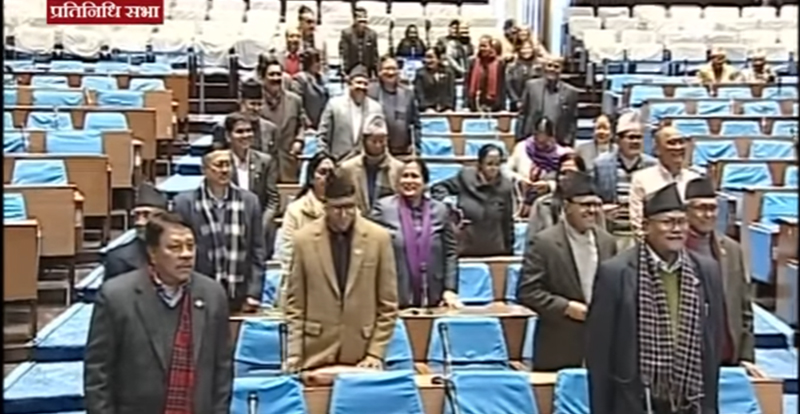 Nepali Congress lawmakers obstruct the meeting of the House of Representatives in New Baneshwor, Kathmandu on Monday, January 21, 2019. Photo: Youtube screenshot
Kathmandu, January 24 Proceedings in the House of Representatives may be stalled tomorrow again, as the ruling and opposition parties have not budged from their stances on two hospitals named after the Koiralas and the National Medical Education Bill. While the ruling Nepal Communist Party (NCP) favoured passing the National Medical Education Bill tomorrow ignoring the NC’s opposition, NC Chief Whip Bal Krishna Khand said his party would obstruct the House proceedings if the party ’s demands were not met. On Monday, the NC had obstructed proceedings in the House of Representatives after the speaker called out the line minister to table the National Medical Education Bill. The NC has also demanded that the government rescind its decision to scrap two hospitals named after late Girija Prasad Koirala and Sushil Koirala. Speaker Krishna Bahadur Mahara today held discussions with NCP’s deputy parliamentary party leader Subas Chandra Nembang, NCP Chief Whip Dev Gurung and NC  Chief Whip Balkrishna Khand. He urged them to find an amicable solution to the House impasse. Both sides, however, stuck to their stances. Mahara said he told the NC leader to drop the two hospitals’ issue and allow the House to pass the National Medical Education Bill as it fulfilled all parliamentary procedures to be taken up by the full House. Mahara said his role as speaker would be to ensure peaceful passage of the bill. He said he was in favour of running the House peacefully. Khand said he told the speaker that he and the ruling party had the obligation to find a negotiated settlement to address the concerns of the NC. Khand added that he told the speaker that NCP lawmakers and marshals exceeded their brief on Tuesday and the same should not be repeated tomorrow. He warned that any untoward incident in the House would adversely impact relations between the two parties. Nembang, who held a meeting with acting prime minister Ishwar Pokharel, said his party would pass the National Medical Education Bill on the basis of majority. Meanwhile, Minister of Communications and Information Technology Gokul Baskota said the government would pass the bill even if it was called authoritarian and arrogant. READ ALSO:
#Nepali Congress #House of Representatives #House obstruction #parliament obstruction #Nepal Communist Party (NCP) #National Medical Education Bill #Scrapping of hospitals #House stalemate
You May Also like: