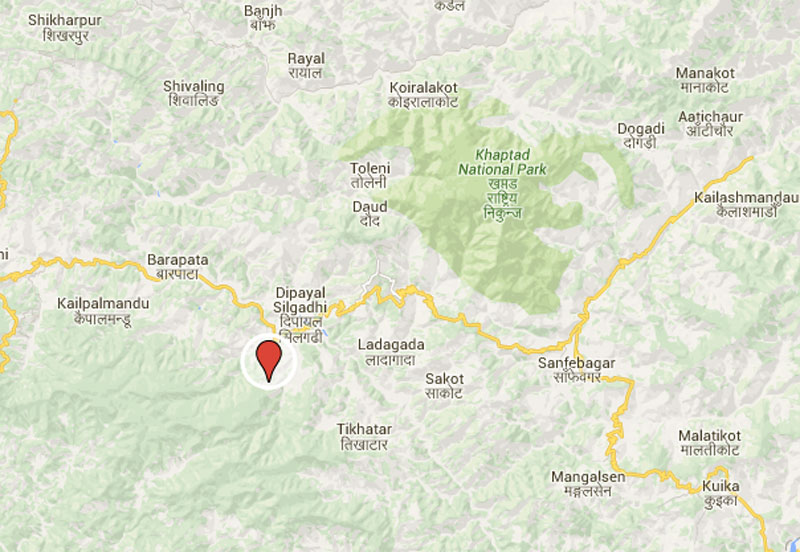 Doti. Photo: Google Maps
Dipayal, April 13 Uchhakot, a village in Jijodamandu VDC-9, Doti, is in shock and mourning following a jeep accident yesterday night. Eight persons, including three professors, were killed and seven others were injured in the incident. The jeep was headed for Jijodamandu from Gopghat in Doti. Jayraj Pant, 62, a noted scholar of Doteli language and literature, lost his life in the accident that occurred at 8:00pm. Pant was assistant campus chief in Padma Kanya Campus, Kathmandu. Jayraj’s wife Guddi Pant, 52, his uncle Ganeshraj Pant, 61, former director of Regional Livestock Directorate, his brother Keshavraj Pant, 59, and sister-in-law Sabitri Pant were killed in the incident. Guddi and Sabitri were also professors at Padma Kanya Campus. Ganeshraj’s wife Narbada Pant, 45, was critically injured in the incident. Similarly, Harina Tamata, 36, Janaki Tamrakar, 17, and driver Chetraj Balayar, 45, were killed in the accident. Chetraj and Janaki died while undergoing treatment in Dadeldhura, while all others were killed on the spot. Among the injured, four are being treated at Far-western Sub-regional Hospital Dadeldhura, while two others are undergoing treatment at Banke’s Kohalpur Medical College and one has been sent to Kathmandu for treatment. The Pant family was heading to their parental home to conduct kul puja. “We lost family members,” Jayraj’s nephew Kritiraj said, adding,”The far-west lost Doti’s linguist while the country lost noted scholars.” Kritiraj said the dream of a family gathering remained a dream. “God did great injustice to us,” Kritiraj lamented. The death of five members from the Pant family has left the entire village in state of shock and mourning. Krishna Bhatta, a local, said that villagers had lost their parents. “We used to take advice from them. Their death has made us orphans,” Bhatta said. Ramlal Joshi, Far Western Literature Society Chairman, said that Jayraj’s demise had lost its senior. “His death has made us orphans”, Joshi said. Jayraj has published a dozen of works on Doteli language and has literary creations to his credit, including Poltabhari Fag, Anjulibhari Sagun, among others. Hari Prasad, Jayraj’s junior brother lamented that his brother’s death had left the village in mourning. “We shall always feel their absence,” Hari Prasad said. Uchhakot village has a single Pant family with more than 21 medical doctors and PhDs. SP Dilliraj Bista said the jeep had fallen 700 metres below in the local stream.
#Kathmandu #Jeep accident #Padma Kanya Campus #Far-western Sub-regional Hospital Dadeldhura
You May Also like: