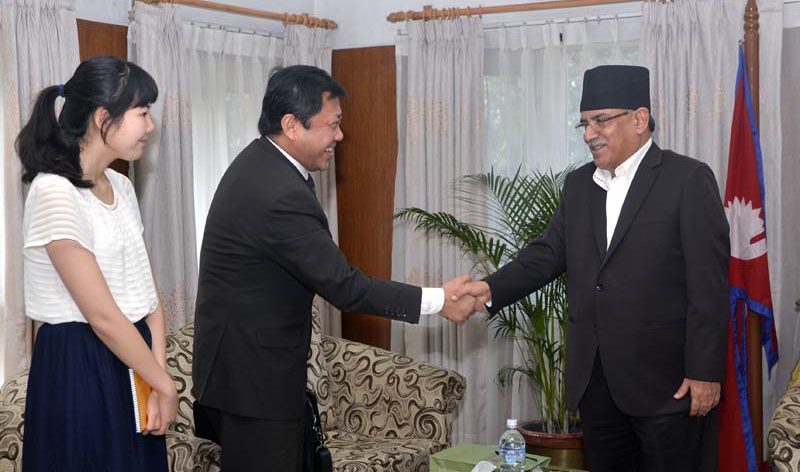 Chinese delegation from the China Institute of Contemporary Relations in a meeting with Prime Minister Pushpa Kamal Dahal at the latter's official residence in Baluwatar on Tuesday, August 9, 2016. Photo Courtesy: PM's Secretariat
KATHMANDU: Nepal's Prime Minister Pushpa Kamal Dahal on Tuesday told a Chinese delegation he was keen to welcome Chinese President Xi Jinping in Kathmandu. It is expected that the Chinese President would come to Nepal on an official visit in October. Xi is scheduled to attend a BRICS Summit along with the heads of state/government of Brazil, Russia, India and South Africa, on October 15-16 in New Delhi. Delegates from the China Institute of Contemporary Relations had called on Prime Minister Dahal at the latter's official residence in Baluwatar today morning. Talking to the Chinese delegation, Prime Minister Dahal said he was looking for building sustainable bilateral relation between Nepal and China, and trilateral relationship with Nepal's two big neighbours India and China, according to a statement issued by Dahal's personal secretariat. The Chinese delegation told the Nepali Prime Minister that China was willing to build a strong relationship with the government that he leads, and ready to support Nepal in post-earthquake reconstruction and big projects. The delegation asked the Government of Nepal to build infrastructure to bring in more Chinese tourists in Nepal, the statement said. READ ALSO:
#Chinese President Xi Jinping #Xi Jinping #Nepal-China #PM Pushpa Kamal Dahal
You May Also like: