Khadka for tough fight with Maoists 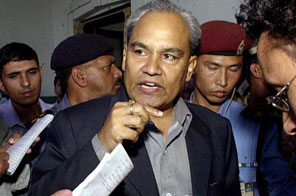 PALPA: Nepali Congress central member Khum Bahadur Khadka today warned that his party would disappear like the Praja Parishad if it did not mobilise youths.
Speaking at a press meet organised by Press Union-Palpa here today, Khadka urged the need for a Tarun Dasta to tame the excesses of the Unified CPN-Maoist.
Khadka said that the 12-point agreement made between the government and the Maoists, earlier, should be strictly followed or else the peace process would collapse. Plots of land seized by the Maoists should be returned and displaced people should be rehabilitated, he added.
Khadka opined that integration of Maoist fighters was important. He said the the Maoists had been torturing district and village-based NC activists.
"The Nepali Congress should now intensify its village campaign to encourage its party activists," he said, reiterating that formation of the Tarun Dasta to retaliate against UML's Youth Force and UCPN-Maoist's Young Communist League was necessary.
Khadka said that the agenda for the formation of the Tarun Dasta would be taken to the central committee meeting.
Stating that the communists have been capturing state, he said that the Maoists were treating NC as their rivals. As such, the NC had no choice but to fight back, he argued.
Khadka, however, criticised the NC leadership for not doing enough to check frequent attacks on its party cadres. Hence, change in NC leadership was necessary, he argued.

#Khadka for tough fight with Maoists
You May Also like: