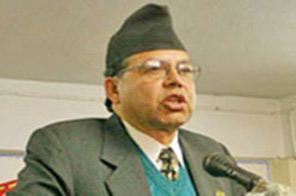 KATHMANDU: CPN-UML chairman Jhala Nath Khanal today threatened to take strong action against those violating the directives of his party.

Khanal, while addressing a programme in the capital, said that he would resort to stringent measures to maintain the discipline in the party in order to prevent a split.

“Anarchism is rampant in the party’s rank and file,” he said. “Airing discontents in the press is unacceptable and such party leaders will face stern action,” he added.

He suggested that the Oli

faction should put forth their differences for discussion in the party. He affirmed that not

any amendment had been made in the party’s statute so far. Oli, however, has been blaming the establishment for changing provisions time and again.

Other UML leaders also voiced their concern about some top leaders speaking against the decision of the Central Committee (CC). Just a few days ago, the CC had directed its leaders not to speak publicly about the party’s internal dispute.

BIRATNAGAR: Jhala Nath Khanal, chairman, CPN-UML, sought unity among parties to draft the new constitution. Talking to journalists in Biratnagar on Saturday, Khanal stressed on the consensus among parties to complete the historic task. He urged

the Maoists to come together and help in the statute

“Toppling the government is irrelevant now and the focus should be on statute drafting,” he said. The UML boss, however, feared political accident in the country if the Maoists were isolated. He also stated that NC, UML and UCPN-M should be united to resolve the present political impasse.

He stated that attempts were underway to bring the Maoists into confidence. He underscored the need that there was no alternative to flexibility and consensus among parties, at the present situation. — HNS