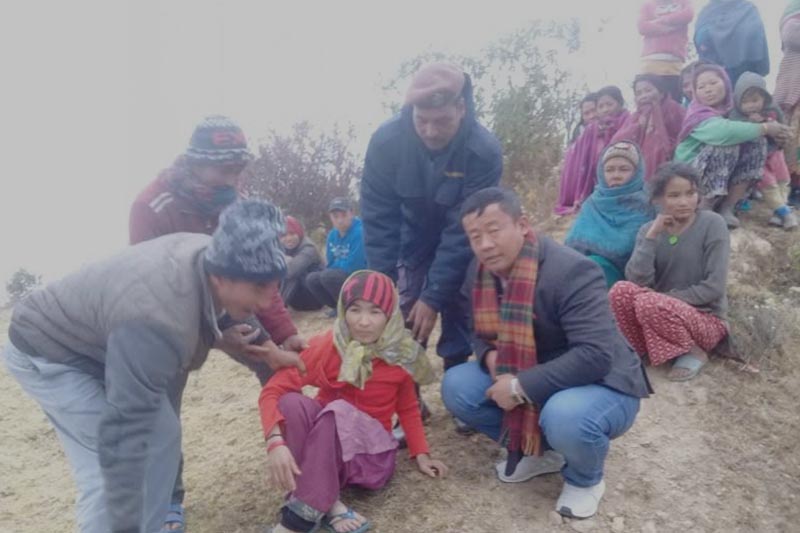 Locals preparing to take mentally ill Ramila Tamang, 33, of Chhitapokhari Basthali in Diprung Chuichumma to Kathmandu for treatment, in Khotang, on Tuesday, December 18, 2018. Photo: THT
Khotang, December 18 At the initiative of Diprung Chuichumma Rural Municipality, Khotang, a woman who had been locked in a shed for the past few months as she was suffering from a mental health condition, was rescued and sent to Kathmandu for treatment. Rural municipality Chair Bhupendra Rai said Ramila Tamang, 33, of Chhitapokhari Basthali was rescued and sent to Kathmandu for treatment. Rai said his office had provided Rs 10,000 as immediate expense to Tamang’s husband Mani Kumar to take her to hospital, adding, “The rural municipality would bear the expenses incurred for Ramila’s treatment.” Tamang was locked in the shed ever since she returned home from BP Koirala Institute of Health Sciences, Dharan, where her condition could not be treated. Following a flood of criticism on social sites, the rural municipality took the responsibility of treating Ramila. Family members had locked Ramila in the shed after she demonstrated abnormal behaviour such as singing, dancing, and thrashing children, among others. Locals said Ramila started developing mental health problem after she complained of headache around six months ago. Ramila has a son and a daughter.  “We were not able to take Ramila to a better hospital for lack of money,” said a family source.
#Khotang #Diprung Chuichumma Rural Municipality #mentally ill woman
You May Also like: