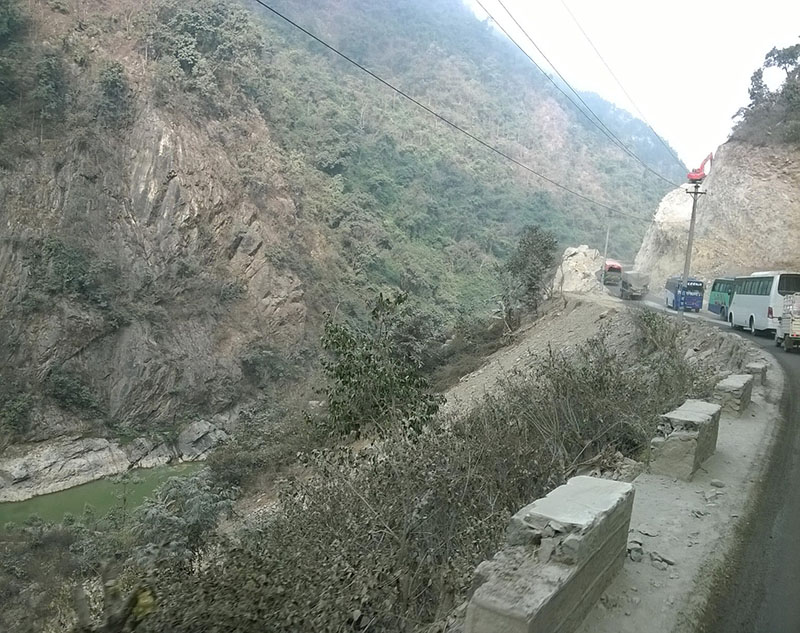 A dozer being used to expand the road along the Naryangadh-Muglin road section, in Chitwan, on Thursday, March 2, 2017. Photo: THT

Going by the present progress in construction of the Narayangadh-Muglin road section, the project is likely to overshoot its deadline.

Despite the original contract that stipulates completion of the project by April this year, just 38 per cent of construction has finished so far.

Interestingly, the project has already got two extensions in a row following requests from contractors who cited the earthquakes of 2015 and the border blockade, among other reasons for delay in project completion.

“As per the extension, construction of Aanptari-Dasdhunga section has to be completed by August 25 and Dasdhunga-Simaltal and Simaltal-Muglin sections by November 28 and December 21 respectively, but from the present work progress, it is obvious that the project can’t meet the deadline,” said Naryangadh-Muglin Road Project Chief Chandra Narayan Yadav, adding that it might require one more extension of contract by a year.

When asked about the inordinate delay, project engineer Shiva Khanal blamed the difficult nature of work.

“We’re carrying out our work even by halting traffic during the day, but as we are short of necessary equipment and work is rather difficult, we’ve failed to achieve much,” said Khanal.

The project for widening the bottleneck of the road that treacherously runs between a river bank and dangerous cliffs is being built with World Bank’s 2.9 billion rupees.

It had started about two years ago.