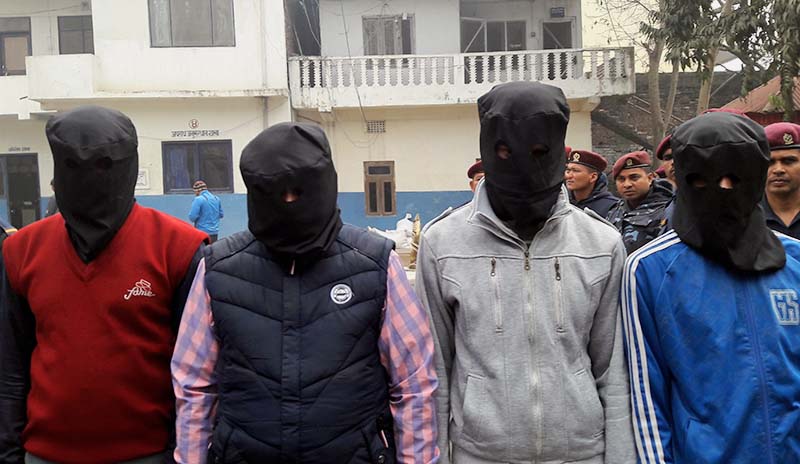 Suspects of the December twin murders in Bara being paraded by Nepal Police in Bara on Tuesday, February 7, 2017. Photo: Ram Sarraf
KATHMANDU: A Nepali man, who is accused of orchestrating train derailment in Kanpur of India that killed 150 people last year, was deported from Dubai and subsequently arrested by the Nepal Police in Kathmandu. Identified as Samshul Hoda (48), the suspect was behind dud attempts to sabotage two railway stations in India and twin murders in Bara of Nepal related to them, Nepal Police said, citing its investigation. Hoda is wanted by investigators in the Indian state of Bihar for the Kanpur sabotage, according to Indian media reports. Hoda had contested the Constituent Assembly II elections as a candidate of Rastriya Madhesh Samajwadi Party. Earlier, he spent 12 years since 2001 in Malaysia for foreign employment. In a statement today, police said Hoda, who returned to Nepal from the United Arab Emirates recently, was arrested from his hideout in Maharajganj area of Kathmandu on Sunday. Hoda and three others --Brij Kishor Giri aka Giri Baba (26), Aashish Singh (24) and Umesh Kumar Kurmi (23) -- were arrested on charge of their involvement in the December 25, 2016 murder of Indian nationals Arun Ram and Dipak Ram in Bara district. READ ALSO: They were paraded at the Bara District Police Office in Kalaiya this morning. Police said they were presented before the District Court an remanded in custody for further investigation. The Ram duo, who were allegedly hired to carry out explosions in two railway stations in India, were put down on Hoda's instruction after they failed to accomplish their duties as per the plan, police said citing their investigation. Referring to security officials,  India media accused Hoda of acting as agent of Pakistani spy agency ISI  to execute the sabotage plot in November last year.

Suspects of the December twin murders in Bara being paraded by Nepal Police in Bara on Tuesday, February 7, 2017. Photo: Ram Sarraf
Police said Hoda had gone to Dubai 18 months ago on a tourist visa, where he came in touch with a Pakistani national, identified as Safi. In return of money, Hoda then allegedly joined hands with an international terrorist group that wanted to carry out explosions in India. Ghorasahan station near Raxaul, bordering Nepal, and Adapur Nakardehi station were chosen as targets. Hoda contacted Giri Baba back in Nepal to execute the plot. The Ram duo were hired via another Indian national, identified as Umashankar Patel, to plant IEDs in the railway stations in exchange of money, according to police investigation. Though the duo took Rs 8,00,000 in advance, they failed to carry out explosions. After feeling that they were dodging him and not executing the plots, Hoda told his henchman Giri Baba to call the Indian men to Nepal and kill them. He had promised Giri and other suspects -- Kurmi and Singh -- of Rs 3 million for the murder assignment. To be sure that the duo were no more threat to him, Hoda allegedly demanded video tape of their murder, according to police. With throat slits, two bodies were found in a community forest three days after the gruesome murders. Kurmi's arrest on December 30 helped police get hold of Giri Baba on January 8.  Giri Baba was injured after police opened fire at him as he tried to flee disguised as woman when they reached to arrest him from his hideout. He was admitted to the Tribhuvan University Teaching Hospital in Kathmandu for treatment.
#deportation #Bara murder #ISI agent #Samshul Hoda #Kanpur train derailment
You May Also like: