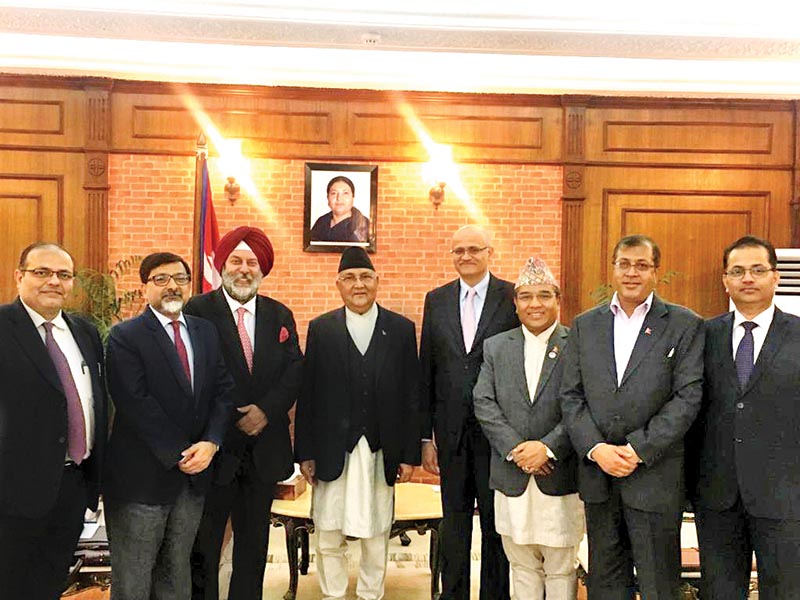 Prime Minister KP Sharma Oli  posing for a photo with Indian Foreign Secretary Vijay Keshav Gokhale (fourth from right), Indian Ambassador to Nepal Manjeev Singh Puri (third from left), Foreign Secretary Shankar Das Bairagi (third from right),  and other Nepali and Indian officials, at Baluwatar, Kathmandu, on Thursday.
Kathmandu, March 28 India and Nepal today reviewed progress on the implementation of bilateral projects and agreements, besides discussing a host of issues related to bilateral relations and regional issues of mutual interest. During a bilateral meeting between Foreign Secretary Shanker Das Bairagi and visiting Indian External Affairs Secretary Vijay Kehsav Gokhale, the two sides reviewed the status of implementation of various projects, including those pertaining to agriculture, connectivity, railways, waterways and other infrastructure. Expressing satisfaction with the progress made in many areas of cooperation in the past one year, both sides agreed to expedite progress on early resolution of pending issues, according to a press release issued by the Ministry of Foreign Affairs following the bilateral talks. During Prime Minister KP Sharma Oli’s state visit to India in April last year, the two countries had agreed to forge partnership in inland waterways, cross-border rail linkages and agriculture. During the subsequent Nepal visit of Indian PM Narendra Modi, the two sides had expressed commitment to expedite the agreements, addressing all pending issues by September 19. Bhrigu Dhungana, chief at MoFA’s South Asia Division, said the bilateral meeting was mostly focused on reviewing progress and addressing bottlenecks in bilateral projects and agreements. The Indian Embassy in Kathmandu said in a press release that today’s bilateral meeting discussed all bilateral projects and initiatives that were discussed and agreed upon during the  visits of the prime ministers of Nepal and India in April and May last year. It stated the two foreign secretaries agreed to maintain the momentum in bilateral engagement across diverse sectors of cooperation and further strengthen the traditionally close, friendly and multifaceted partnership between the two countries. Sources said the meeting also ‘generally’ discussed delay in the submission of the report prepared by the Eminent Persons Group on Nepal-India Relations. The ninth and final meeting of the group on June 30 had finalised its report to be submitted to the two governments. The EPG had then decided to submit the report, which has made recommendations on update, adjustment or amendment needed in all exiting bilateral treaties, agreements, understandings, including the Peace and Friendship Treaty of 1950, to the Indian government first. However, EPG members representing the Nepali side have been saying that they are waiting to fix an appointment with Indian Prime Minister Narendra Modi for submission of the report. Gokhale, who arrived in Kathmandu today for an official visit, also paid courtesy calls on Prime Minister KP Sharma Oli and Minister of Foreign Affairs Pradeep Kumar Gyawali. He is scheduled to return home tomorrow.
#India #Nepal #Ministry of Foreign Affairs #bilateral projects
You May Also like: