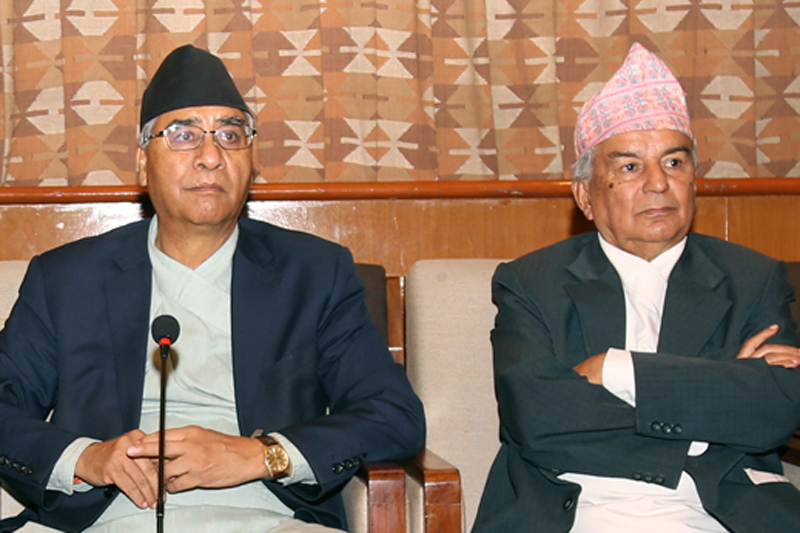 Nepali Congress President Sher Bahadur Deuba and senior leader Ram Chandra Paudel attending a party's meeting in Naya Baneshwor, Kathmandu, on Tuesday, August 23, 2016. Photo: RSS
Kathmandu, August 24 The Nepali Congress today failed to decide names of ministers from the party due to disagreement between two panels led by party President Sher Bahadur Deuba and senior leader Ramchandra Paudel over the number of ministries for each faction. Deuba will try to convince the Paudel-led panel tomorrow but even if consensus cannot be forged he will send the names to Prime Minister Pushpa Kamal Dahal for appointing ministers and state ministers from the NC, claimed a senior leader close to Deuba. The party president, who had planned to pick ministerial candidates today, also postponed his three-day visit to Singapore scheduled to begin today. A meeting of leaders of the two factions held at Deuba’s residence in Budhanilkantha witnessed heated discussion on the issue till late evening. Deuba had offered four ministerial berths to the Paudel faction while the Paudel faction had demanded at least five ministries, said sources. The Paudel-led faction blamed Deuba for taking decisions unilaterally by undermining a large section of the party and ignoring intra-party balance while taking decisions on ministerial portfolios. Paudel, Prakash Man Singh, Ram Sharan Mahat, Sita Devi Yadav and Minendra Rijal were present in the meeting from the Paudel faction. Although the NC has a quota of 13 ministers and is also planning to send seven state ministers from the party in the Pushpa Kamal Dahal-led government, it hasn’t been able to decide on 11 names even 20 days after Dahal was elected PM on August 3. The NC had sent Bimalendra Nidhi and Ramesh Lekhak for two ministerial berths. Earlier, Paudel consulted the Central Working Committee members belonging to his faction this morning and held a meeting with members of Parliament from the NC in the evening at his home. In both the meetings it was decided that the Paudel faction would not join the government until Deuba took a decision based on the party’s rules and established norms, according to CWC member from Paudel’s faction Badri Pandey. CWC members and lawmakers from the Paudel faction expressed discontentment against party President Deuba for not giving due respect to the faction while nominating ministerial candidates from the party, Pandey said. Some members of the party, including Sarita Prasain, Bal Bahadur KC, Rajan KC and Nabindra Raj Joshi had claimed that leaders of the Deuba faction had contacted them offering ministerial berths, according to party sources.
#Nepali Congress #Sher Bahadur Deuba #Ram Chandra Paudel
You May Also like: