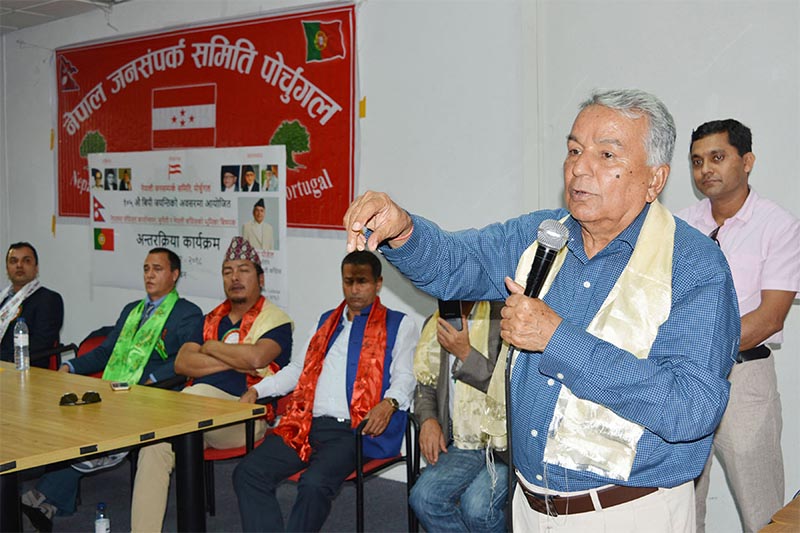 Nepali Congress senior leader Ramchandra Paudel address an interaction programme on 'implementation of federalism in Nepal, challenges and the role of Nepali Congress,' in Lisbon, Portugal, on Thursday, September 20, 2018. Photo: RSS
LISBON, PORTUGAL: Nepali Congress senior leader Ramchandra Paudel has underlined the need of moving ahead by protecting the achievements of political movements. In his address to an interaction programme on 'implementation of federalism in Nepal, challenges and the role of Nepali Congress,' on Thursday in Portuguese capital Lisbon, he was of the view that federalism and democracy achieved through a long struggle must be safeguarded. He went on saying that the party would move ahead by institutionalising democracy and federalism. The party activities would be focused on the safeguarding of achievements and changes made so far. Sharing his experiences in the course of his political struggle for change in the nation and for people's justice, Poudel said he had spent 14 years of his life in jail, adding his struggle was not for power. Highlighting the important contribution of BP Koirala in bringing change in the nation, the former deputy prime minister said, "Justice for helpless and income for poor" is the true socialism floated by BP. The constitution and federalism were in the phase of implementation and the formation of a single ethnicity-based federal State was not possible. He was of the view of reviewing the party's defeat in the election, adding that despite the loss, the party's ideology got a victory. He insisted on the need of reforming the party by ending the culture of factionalism and other misconducts within it. He took the time to call on Nepali aboard to return home with skills, knowledge and capital gained in foreign soil as opportunities and environment for investment has already been built at home. The programme was organised by Nepali Janasamparka Samiti, Portugal.
#Nepali Congress #federalism #Portugal #Ramchandra Paudel #constitution #BP koirala #Lisbon #political movements #political achievements #Federalism in Nepal
You May Also like: