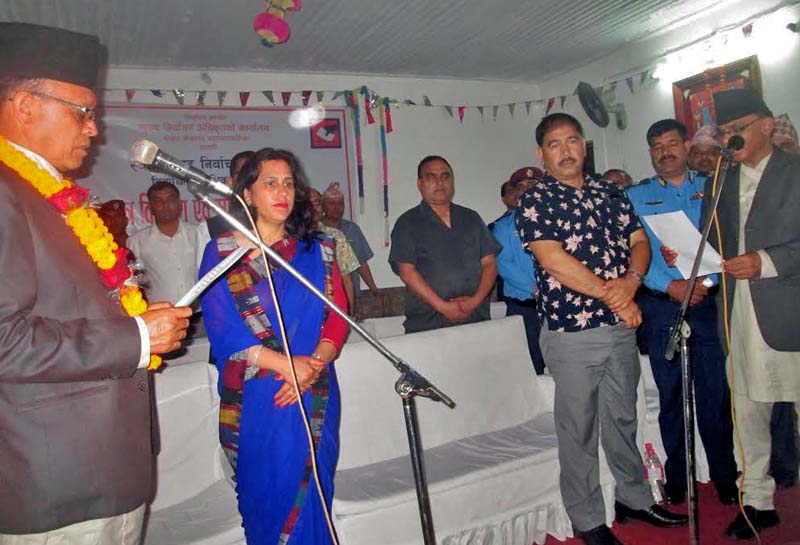 Newly elected mayor of Pokhara-Lekhnath Metropolitan City Man Bahadur GC taking the oath of office and secrecy from the chief election officer, in Pokhara, on Sunday. Photo: THT
Pokhara, May 28 Chief Election Officer Nagendra Lal Karna today administered the oath of office and secrecy to the newly elected Mayor Man Bahadur GC and Deputy-mayor Manju Gurung of Pokhara-Lekhnath Metropolitan City at the metropolis office in Kaski. As many as 167 members of various local units, including the mayor, deputy-mayor, ward chairs, ward vice-chairs, among others, were also administered the oath of office and secrecy. The mayor and deputy-mayor assumed their respective responsibilities in the offices today. Assuming the responsibility, GC said he would work for the people. His major promises during the election campaign include increasing the locals’ social security allowance by 10 per cent, providing free legal counseling to victims of domestic and gender based violence, and good governance. Putting his signature in the minute book, GC maintained that skills training and facilities to elderly citizens would be managed in the city. Executive Officer of the metropolis Dirgha Narayan Poudel had handed over the minute book.
#Kaski #Mayor #Manju Gurung #Pokhara Lekhnath Metropolitan City #Chief Election Officer #Man Bahadur GC
You May Also like: