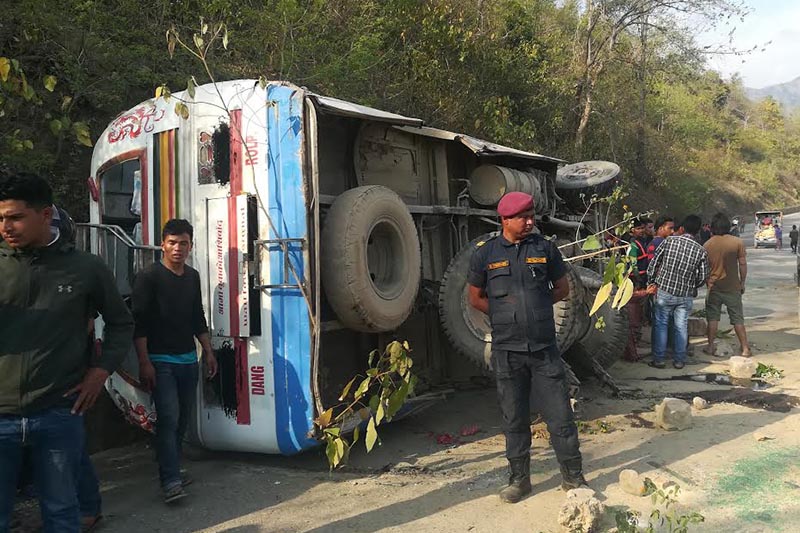 A security person standing at the site where a bus overturned on its side at Bagale of Ghorahi sub-metropolis, Dang, on Monday, March 18, 2019. Photo: THT
Dang, March 18 One person died and 34 others sustained injuries after a bus overturned in Ghorahi sub-metropolis of Dang today. The deceased has been identified as bus driver Harka Bahadur Pun Magar, 23, of Runtigadi Rural Municipality, Rolpa. Reportedly, the springs of the bus gave way while on the move, causing the bus to trip over on its side on the roadside near Bagale in Ghorahi sub-metropolis at about 2:45pm. The bus was headed to Dang from Rolpa’s Baghmara. According to Ward Police Office Ghorahi Inspector Shashi Sharma, three were seriously injured. Indra Bahadur Gharti, 76, of Rolpa; Ratha Gharti Magar of Dang and Sunpura Dangi have been seriously injured. “The three were referred to Nepalgunj for treatment, while others are being treated at Rapti Sub-regional Hospital in Ghorahi,” Sharma said. A joint team of police from the ward police office and locals had rescued the injured.
#Dang #Dang accident #Dang bus accident #Ghorahi Sub-metropolis
You May Also like: