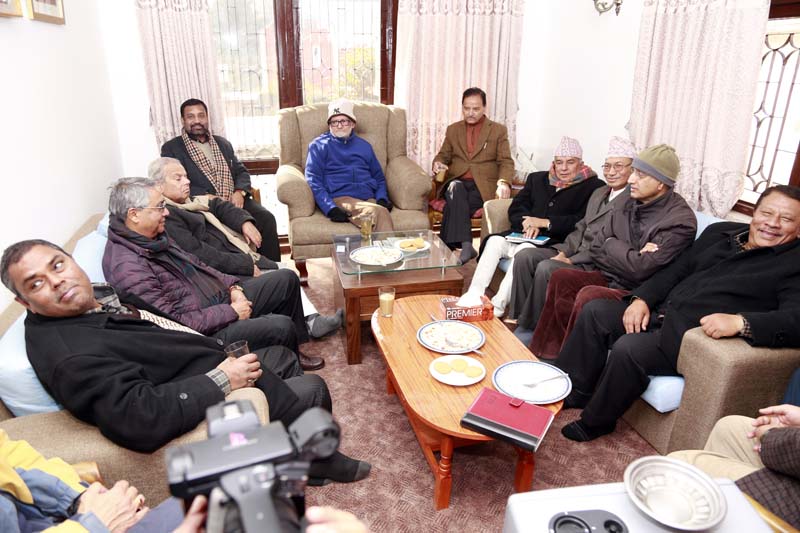 Leaders of the main opposition party, Nepali Congress (NC) and the United Democratic Madhesi Front (UDMF), holding a discussion at NC President Sushil Koirala’s residence at Maharajgunj, on Tuesday, December 22, 2015. Photo: RSS
Kathmandu, April 13 Leaders associated with the United Democratic Madhesi Front have termed Prime Minister KP Sharma Oli’s offer of talks with the agitating Madhesi forces as an eyewash. The PM, while delivering televised message to the public yesterday, had invited the agitating forces to negotiating table to seek negotiated settlement on constitutional issues. Spokesperson for the Tarai Madhes Democratic Party Sarvendranath Shukla said the PM’s offer of talks was aimed at giving a false impression to the international community that the government was trying to find negotiated settlement to the Tarai problems. Shukla said the PM made similar offer when he became the PM but he formed the government’s talks team only after a month which reflected lack of sincerity on his part. “In his televised address delivered yesterday, the PM said he could not understand the reasons behind Madhes agitation. How can the government find solution if it continues to ignore the reasons behind a movement which saw 20 lakh people taking to the streets to protest against discriminatory provisions of the constitution?” Shukla wondered. He said the PM did not even bother to listen to the UDMF’s political demands the day the UDMF leaders went to submit a memorandum to the PM. “We sat for talks for four and a half hours that day, yet the PM discussed nothing about our political demands,” he added. He said the UDMF was not against dialogue but the government needed to make sincere efforts to seek negotiated settlement of the Tarai problems. Shukla said the government should announce what would be the constitutional status of the report of the committee and what would be its terms of reference. Chairperson of Sadbhawana Party Rajendra Mahato said PM’s offer of talks was waste of time. “We had given the government an ultimatum to address our concerns before April 12. Instead of addressing our demands within the time frame, the government just made an offer of talks. This shows how indifferent this government is to our demands,” he added. Mahato said PM’s offer of talks was a ploy to stop the UDMF from taking to the streets. He said the PM could have given the best gift to the citizens had he resigned from the post of prime minister citing his inability to rule the country, to find negotiated settlement of the Tarai agitation and to control black-marketing. “This government did not address any of the challenges the country faces,” he added. Mahato said the UDMF would unveil its protest programmes in a few days and the front’s movement would be Kathmandu centric. “We are going to launch Singha Durbar centric movement to lessen the woes of the public. This government is insensitive and does not care about people’s suffering,” he argued. Senior leader of Tarai Madhes Sadbhawana Party-Nepal Ram Naresh Ray said the PM’s actions did not match his words, therefore, he did not believe that the PM was sincere about negotiated settlement of Madhes problems. “We changed the forms of protests after stakeholders suggested the same and even after two months, nobody  neither the government nor the major parties  came to talk to us about our demands,” Ray said and added that the UDMF and the Federal Alliance had no option but to launch another movement.
#United Democratic Madhesi Front #Singha Durbar #KP Sharma Oli #Tarai Madhes Sadbhawana Party Nepal
You May Also like: