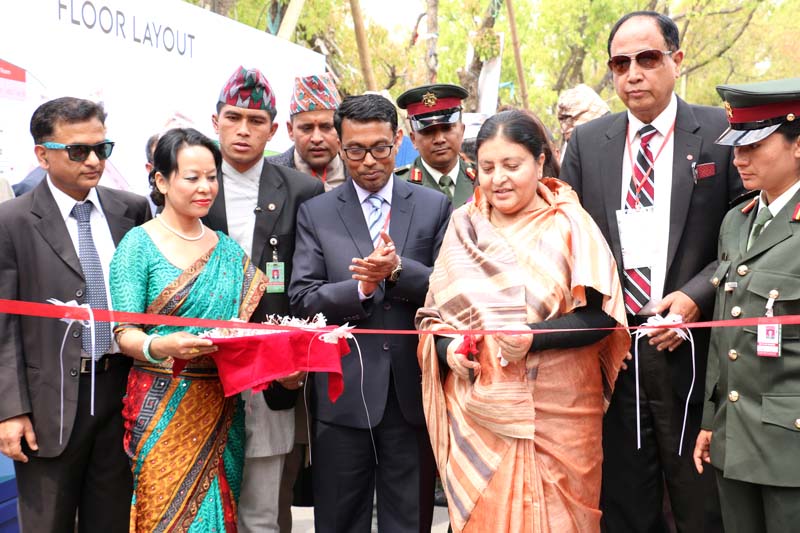 President Bidya Devi Bhandari cuts ribbon to inaugurate the fifth Nepal International Trade Fair 2016 in Bhrikutimandap, Kathmandu, on Thursday, March 17, 2016. Photo: RSS
GORKHA: President Bidhya Devi Bhandari is set to lay foundation stone for the construction of the earthquake memorial pillar on Baisakh 12 (April 24) which marks the completion of a year of the 'Gorkha Earthquake'. Local Development Officer of Gorkha Narayan Prasad Acharya shared that the President is scheduled to lay foundation stone for the earthquake memorial park to be constructed in Barpark-4 in commemoration of those killed in the Gorkha Earthquake. The District Natural Disaster Relief Committee took the decision to construct a memorial park in 218 ropanis land owned by the local body and the government. A study committee had also recommended the land to be appropriate for the construction of park. Likewise, a preparation has been made to sign a grant agreement with a beneficiary to initiate grant handover process in Barpak on coming Baisakh 12. "The President will also launch the reconstruction campaign by laying foundation stone for the rebuild of a house", Acharya said, adding that "The reconstruction works will begin from Haspur of electoral constituency number 2 and Barpak of constituency number 3 of Gorkha". However, it is yet to ascertain from where the reconstruction works will begin in constituency number 1, he added. As many as 472 people were killed while over 1,100 people sustained injuries in the last year's devastating earthquake. Around 70,000 houses were completely damaged in the disaster.
#Gorkha Earthquake #Gorkha #Earthquake Memorial Park
You May Also like: