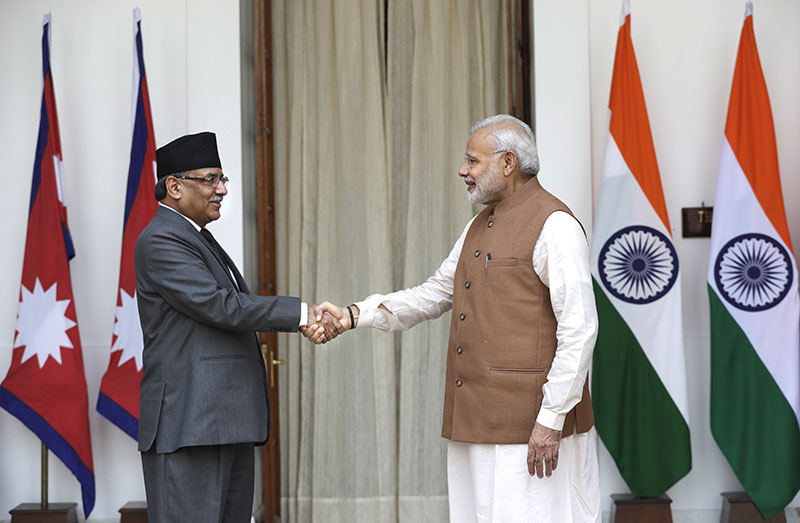 At the invitation of Indian Prime Minister Narendra Modi, PM Dahal is flying off to Goa on Saturday. BRICS is a group of five emerging economies Brazil, Russia, India, China and South Africa and PM Dahal is scheduled to meet leaders of all five countries, according to an official at the Ministry of Foreign Affairs.

Likewise, he will also meet all attending leaders of BIMSTEC countries. BIMSTEC the Bay of Bengal Initiative for Multi-Sectoral Technical and Economic Cooperation is an inter-governmental organisation, where Bangladesh, Bhutan, India, Myanmar, Nepal, Sri Lanka and Thailand are members.

Heads of state/government of all BIMSTEC countries are also visiting Goa as India is organising a joint meeting of BRICS and BIMSTEC leaders, right after the BRICS Summit on October 16.

The joint summit aims to enhance cooperation between BRICS and BIMSTEC members in multiple sectors, including tourism, connectivity, trade and investment, technology, and energy, said Joint Secretary Mani Bhattarai, who heads the multilateral cooperation division at the Ministry of Foreign Affairs.

As current chair of BIMSTEC, Prime Minister Dahal will address BRICS Summit right after inaugural speech of Indian Prime Minister Narendra Modi, according to a senior diplomat at the Indian Embassy in Kathmandu.

Bhattarai told The Himalayan Times that an understanding of cooperation between BRICS and BIMSTEC in aforementioned areas was likely to be reached in Goa.

On October 16, BIMSTEC leaders at first will sketch out agenda and issues to be discussed with BRICS leaders. Then a joint meeting of BRICS and BIMSTEC leaders will be held.

“This is a huge opportunity for a country like Nepal,” a senior MoFA official said. “We have to utilise this opportunity.”

Foreign Minister Prakash Sharan Mahat, who would accompany the prime minister, confirmed that PM Dahal will hold a bilateral meeting with Chinese President Xi on Saturday. The meeting will focus on smooth implementation of Sino-Nepal agreements, Xi’s prospective visit to Nepal and areas of cooperation in multilateral forums, according to a source.

Meanwhile, foreign policy experts said the PM participation in BRICS Summit should be utlised to attract foreign investment in Nepal as well as to enhance bilateral cooperation with BRICS countries.

Speaking at Reporter’s Club today, former foreign secretary Madhu Raman Acharya stressed on taking up the connectivity issue when PM meets Chinese President Xi in Goa. “We have to take initiatives towards connecting China with South Asia via Nepal,” Acharya, who has presented dozens of papers on China’s new SILK routes initiatives, said. “Missing linkages should be connected.”

Expressing doubts on Nepal’s “balanced diplomatic dealings” with its neighbours in recent times, former ambassador Shankar Sharma said PM Dahal, during his meeting with Chinese President, has to clear suspicions, if there were any.