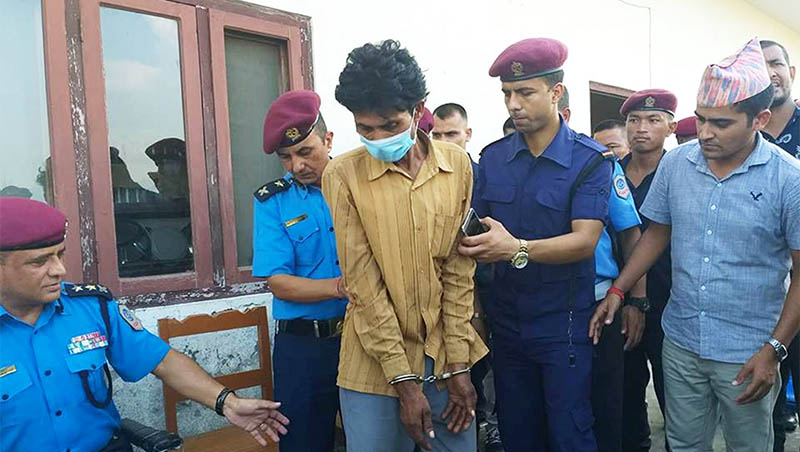 A suspected acid attacker being made public at Bara District Police Office. Photo: Prabhat Kumar Jha
RAUTAHAT: A person who allegedly carried out an acid attack on two sisters in Rautahat district has been arrested from Kathmandu today, police said. The suspect, 50-year-old Ram Babu Paswan of Chandrapur Municipality-6, was made public at the District Police Office this afternoon. The victims Samjhana Das (18) and her sister Sushmita (15) were sleeping on the ground floor on that fateful night. Paswan, who was their neighbour, barged into the room by breaking padlock, sprinkled acid over the sisters and fled the scene, according to police. The sisters suffered severe facial burns after the 'targeted' acid attack at midnight of September 11. After primary treatment at local Chandrapur Hospital, they were referred to Model Hospital in Kathmandu for further treatment. Elder sister Samjhana suffers 35 per cent burn injuries including in face and other parts of the body. She is receiving treatment in the Intensive Care Unit (ICU) whereas her sister Sushmita who sustained 12 per cent burn injuries is recuperating at the general ward, police said. Superintendent of Police (SP) Kedar Dhakal said, "It was a difficult case to crack but our thorough investigation yielded a fruitful result." "We analysed mobile call details of Ram Babu Paswan and found that he had made an astonishing 118 calls only a few days before the incident. He was arrested from Model Hospital where he had accompanied the victim's father to Kathmandu," Dhakal said. According to SP Dhakal, the suspect was presented before the District Court today and remanded to custody for eight days for investigation. He further said, Rautahat District Administration Office extended support of Rs 25,000, Chandrapur Municipality provided Rs 150,000 and locals collected Rs 200,000 for the treatment of the victims. The collected fund was handed over to the victims' kin.
#Rautahat district #Acid attack #Rautahat District Police Office
You May Also like: