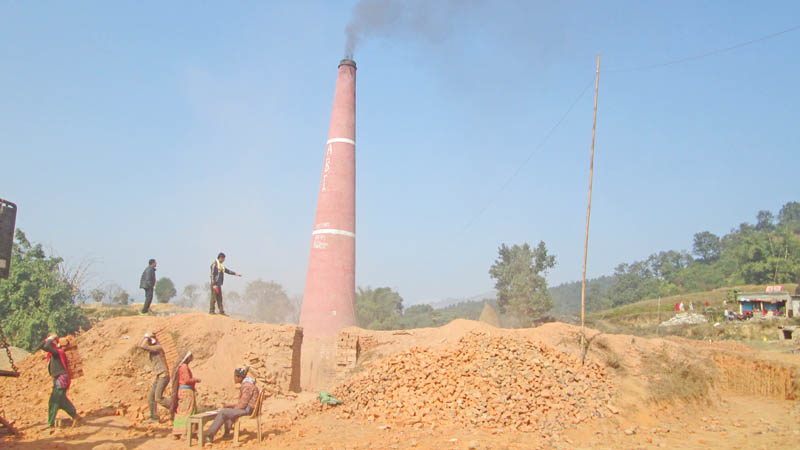 Workers at a brick kiln in Jamune VDC, Tanahun, on Sunday. Photo: THT

Brick kilns in Tanahun district have not been able to produce adequate bricks on account of the protracted agitation in the plains and border blockade.

The brick kiln owners said they were compelled to operate their kilns despite huge loss as they’d invested a huge amount in the business.

Owner Govinda Raj Panta of Asmita Brick Industry said they hardly produced any brick these days due to the lack of raw materials. “The market price for bricks has also gone down of late,” he informed. He said Machhapuchare, Pokhareli, Manakamana, Asmita, Shreeram and Hosanna, among other kilns, produced bricks in the district.

It is said that Tanahun, Shree, Jamune and Ram brick industries were shut for want of raw materials following frequent bandhs and the ongoing blockade.

Asmita Brick Industry, which is spread in an area of around 150 ropani, produces as many as 4,500,000 bricks annually. As many as 200 workers are currently employed in the factory.

Brick entrepreneurs complained that their business was in peril as very few houses are being built after the earthquake. The bricks produced in the district are supplied to Kaski, Baglung, Myagdi, Lamjung, Gorkha and Syangja, among other districts.