'Some 100 thousand staff for second round polls' 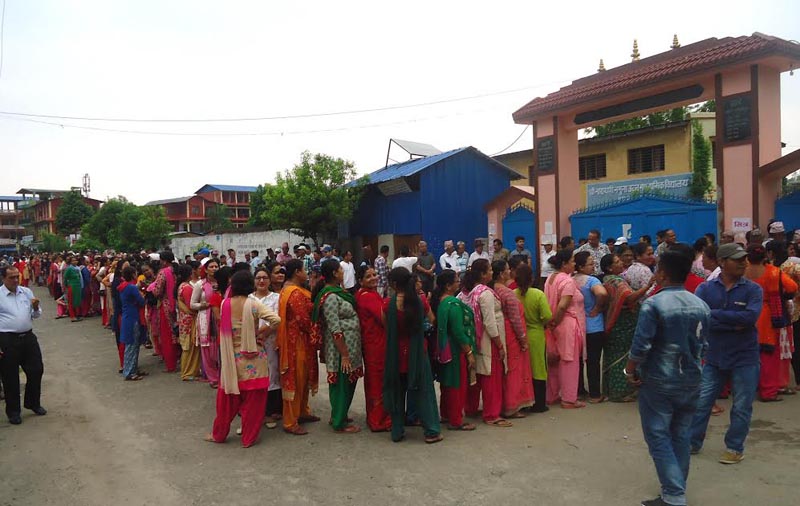 File: Voters formed a line as early as 6:30 am on Sunday, May 14, 2017 to cast their votes at Narayani Namuma Higher Secondary School in Bharatpur Metropolitan City-10, Chitwan. Photo: Tilak Ram Rimal
KATHMANDU: The Election Commission has stated that it is going to deploy around 100 thousand employees in addition to security personnel in the second phase of local level elections slated for June 14. EC spokesperson Surya Prasad Sharma informed that preparations for the second phase of polls have been completed, adding that 95 thousand 931 employees excluding security personnel will be deployed for the election works. There are 6718 voting centres and 11,931 polling booths at 461 local levels. A total of 23 thousand 383 people's representatives would be elected for 12 Sub-metropolitan Cities, 156 Municipalities and 293 Rural Municipalities. The offices of the Chief Returning Officers have been set up in 41 districts of Province 1, 2, 5 and 7  on May 20 itself and are already operational. The District Court Judges of the respective districts have been assigned the responsibility of Chief Returning Officers while Under-Secretaries of Nepal Government will take up the responsibility of  Returning Officers. The Offices of the Election Officer at the local level would be set up on May 29. The Chief Returning Officers will take the leadership of the election process throughout the district as well as carry out works as the Election Officer of the local level in the district headquarters. The Chief Returning Officer is also responsible for checking the election materials to be dispatched to every polling booth in the district concerned, managing logistics, and managing and training employees to be deputed to the polling stations. According to spokesman Sharma, the Election Commission has already transported the voters' list, voter identity cards, and all the election-related materials to respective districts. Although the government recently added 22 local level units in Terai districts, this decision has been suspended by a Supreme Court stay order.
#Election Commission #Nepal polls #second round of polls #local body elections in Nepal #deployment of staff in polls #poll staff
You May Also like: