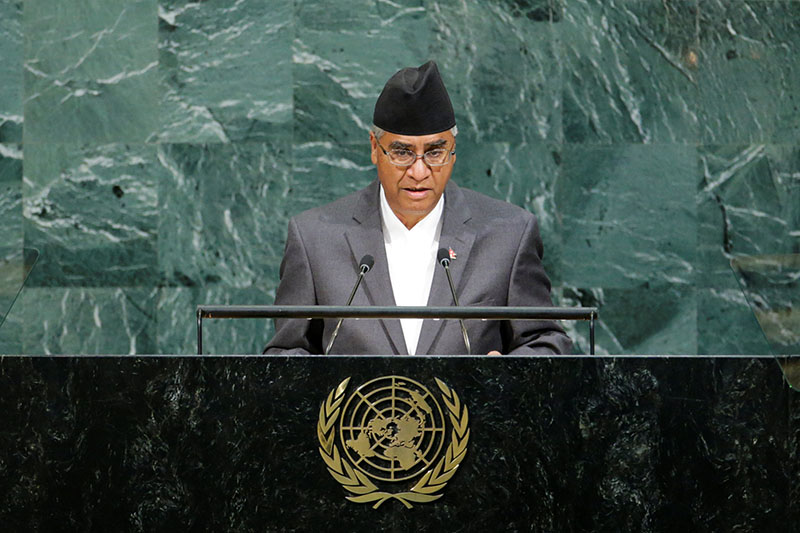 Nepali Prime Minister Sher Bahadur Deuba addresses the 72nd United Nations General Assembly at UN headquarters in New York, US, on September 23, 2017. Photo: Reuters
Kathmandu, September 23 Prime Minister Sher Bahadur Deuba today sought member states’ support for Nepal’s candidature for membership of the United Nations Human Rights Council for the term 2018-2020. Stating that Nepal has been fulfilling its international obligations as a party to the 24 international human rights instruments, PM Deuba said Nepal’s first-ever election to the council would be a recognition of the country’s commitment and contribution to the field of human rights and an encouragement to do more at national and global levels. “We seek the invaluable support of all member states to Nepal’s candidature,” said the PM, addressing the 72nd session of the United Nations General Assembly. The PM said the constitution of Nepal accommodates aspirations of all its citizens and guarantees human rights and fundamental freedoms. He also said Nepal views the right to life as the most important of all human rights and Nepal’s constitution bars the death penalty in all circumstances. He also said the ongoing transitional justice process combines Nepal’s international commitment and ground reality of delivering justice and establishing peace. “Success of Nepal’s home-grown, nationally-driven peace process has firmly established a culture of dialogue and accommodation,” he said. The PM said proportional representation of all sections of society is at the core of Nepal’s inclusive democracy. After successful local-level elections, dates have been announced for provincial and federal parliament elections, he said. PM Deuba said the essence of Nepal’s foreign policy was the five principles of peaceful coexistence. He added that the country believed in non-alignment and judged every issue on its merit in the exercise of independent foreign policy. Underscoring Nepal’s firm belief in the indispensability of the United Nations in multilateral affairs and global governance, Deuba stressed the need to address the under-representation of developing countries in the UN Security Council.   “Reforms must be inclusive and representative in structure, transparent and efficient in procedure, and accountable and effective in delivery,” he said. On issues facing Landlocked Developing Countries, the PM said cost of trade was higher for LLDCs than coastal countries. He said development of multi-modal transport infrastructure and unhindered transit rights of landlocked nations were crucial to their sustainable development. The PM also said concerted efforts were needed at the national, regional and international levels to ensure that the migration process created a fair, win-win situation for all. He  called for safety, security, dignity and well-being of all migrant workers. On climate change, the PM called for greater global cooperation and coordination in prevention, mitigation and recovery. Stating that poor and vulnerable countries disproportionately suffer from climate change despite their negligible role in greenhouse gas emissions, he urged implementation of the Paris Agreement in synergy with the 2030 Agenda. On the 2030 Agenda for Sustainable Development, Deuba said the path to peace and decent life would remain elusive without resources and commitment to implementation of sustainable development goals. He stressed delivery on commitments, inclusive process, coordinated efforts and shared responsibilities backed by adequate resources. Stressing that the world must come together to address not just the symptoms but the root causes of terrorism, Deuba called for time-bound, general and complete disarmament of weapons of mass destruction. Finally, PM Deuba reiterated Nepal’s profound commitment to the principles and purposes of the UN Charter. He will leave New York for Muscat, Oman, tomorrow, where he will address heads of Nepali diplomatic missions in the Gulf region and provide direction on matters relating to promoting and protecting interests of Nepal and Nepali migrant workers in the region. The PM will return to Kathmandu on September 28.
#United Nations #United Nations Human Rights Council #United Nations General Assembly #Prime Minister Sher Bahadur Deuba #International Human rights instruments
You May Also like: