Three persons held in connection to septuagenarian murder in Pokhara 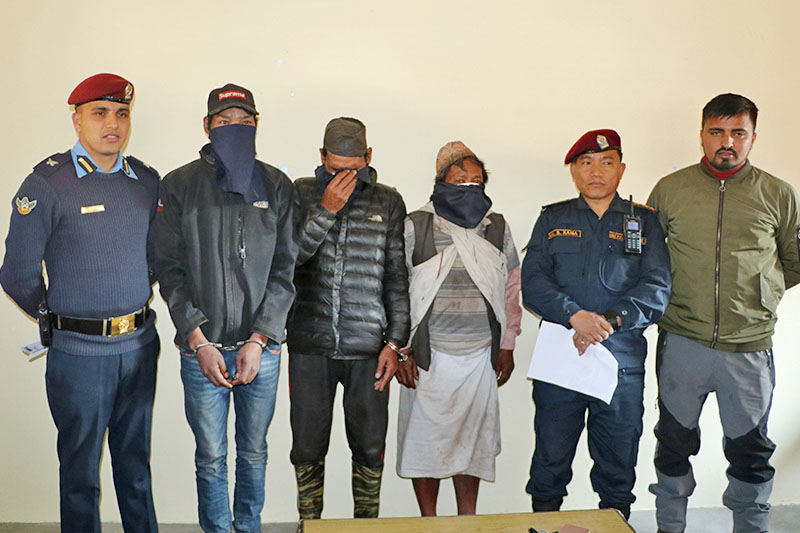 POKHARA: Three persons arrested on the charge of murdering a septuagenarian were paraded at Kaski District Police Office in Pokhara today, police said.

According to District Police Chief, Superintendent of Police (SP) Om Rana, the suspects have confessed to their crime.

Four days ago, police had recovered a suspicious body with multiple wounds from Modi river banks in Annapurna Rural Municipality-10 of Kaski district.

After a preliminary investigation, police ascertained the deceased as 73-year-old Dil Bahadur Sarki of Deupur in Madi Rural Municipality-2 of neighbouring Parbat district.

Through the initial investigation, police arrested 31-year-old Budhiman Sarki of Annapurna Rural Municipality-10 in suspicion of committing the crime. After interrogation, Budhiman accepted his involvement in the crime along with other two men.

Subsequently, police apprehended his 60-year-old father Neem Bahadur and 73-year-old uncle Lalsi from their houses in the same Rural Municipality.

"Under the influence of alcohol, Dil Bahadur abused us and we hacked him to death," SP Rana quoted the suspects as saying.

According to SP Rana, on the fateful night of December 23, it was a murder committed in a fit of rage.