However, here is a concrete example of how the committees are performing less due to the neglect of top leaders of political parties, who give no priority to the committee meetings. 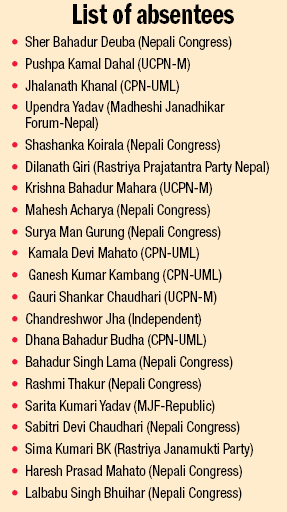 After 21 members of the 47-member Good Governance and Monitoring Committee remained absent from five consecutive meetings without informing the panel chairman, a meeting of the panel today decided to draw the attention of the absentees through their parliamentary parties and Speaker Onsari Gharti.

The 21 leaders have blatantly flouted Rule 122 of the Legislature Parliament Regulations by remaining absent from five consecutive meetings of the committee.

“The Speaker can remove a member from the committee on the recommendation of the panel Chairman if the former remains absent for five consecutive meetings and will inform the assembly about the action,” states rule 122 of the regulations.

Prominent leaders of all parties remain in the Good Governance and Monitoring Committee as it is mandated to look into serious matters relating to corruption, abuse of authority and can oversee the performance of Office of Prime Minister and Council of Ministers and Commission for the Investigation of Abuse of Authority.

However, the absence of prominent leaders has made the committee’s performance very weak.

“Although all members are equal in the committee, the presence of top leaders who have a kind of authority in the country’s politics would give more weightage to the committee’s decisions.

The committee’s performance would have been far better had the top leaders attended its meetings regularly and given their inputs.

However, their absence has affected the committee meetings and its performance. So, the panel today decided to draw their attentions,” the committee’s Chairman Mohan Singh Rathor told THT.

Their absence has also created many difficulties in maintaining the quorum of the panel as it needs the presence of one-fourth members (12), according to the committee’s Secretary Jib Raj Budhathoki.

“As 21 members remained absent repeatedly during the last five meetings, we had to face difficulty maintaining quorum. Many times we could not begin the meeting on time as we had to wait for the members’ presence for the required quorum.

Even at today’s meeting, only 14 of the 47 members were present,” he said.

The panel will write to the chief whips of the respective parties and the Speaker about the absentees and today’s decision to draw their attention, he said, adding, “Although the committee can recommend removal of the members from the panel, it has just drawn attention without seeking this action”.

#Legislature-Parliament #Commission for the Investigation of Abuse of Authority #Office of Prime Minister and Council of Ministers #Speaker Onsari Gharti #House panel meetings
You May Also like: