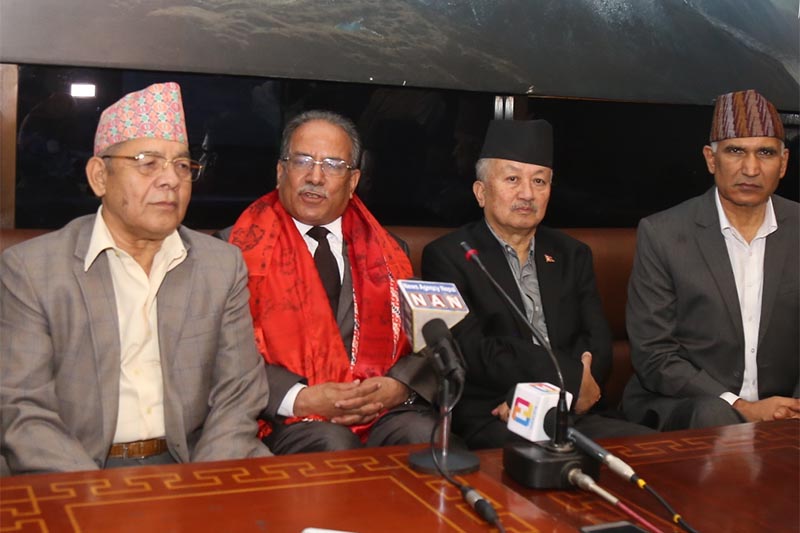 Nepal Communist Party (NCP) Co-chairperson Pushpa Kamal Dahal (centre) talks to mediapersons upon his arrival from Four-day China visit, at Tribhuvan International Airport, on Wednesday, September 19, 2018. Photo: RSS
KATHMANDU: Nepal Communist Party (NCP) Co-chairperson Pushpa Kamal Dahal has said the enforcement of the protocol of the transport and transit agreement reached between Nepal and China was discussed from various dimensions during his visit to the northern neighbour. Talking to reporters following return from a four-day visit of China on Wednesday night at Tribhuvan International Airport (TIA), Chair Dahal claimed that the major success of his visit was to create an atmosphere for the timely enforcement of the recent agreements and understandings between the two governments. He also said that the visit was focused on expanding relations between the NCP (NCP) and the ruling Communist Party of China (CPC). Serious deliberations were held with the CPC leadership in consolidating the two-party relations. During the visit, Chairperson Dahal met and held talks with the Chinese Vice-president, the Vice-minister of the External Affairs and the Minister of the International Department along others. The former Prime Minister said that a concrete agreement was reached on setting up a mechanism for regular exchange of views and experience between the central party schools of the two parties. Both sides held common understanding on the presence of stable political leadership and stability in the two countries, with development and prosperity being the major agenda of the two parties. He shared that collective discussion was held with the former Prime Ministers of Japan and France, former President of Costa Rica, the deputy Prime Minister of Mongolia and other leaders from around the world in the meeting organised by the peace and disarmament committee of the CPC. MCP (NCP) Secretariat member Bamdev Gautam, Ram Bahadur Thapa, General Secretary Bishnu Poudel, leaders Subas Nembang, Dev Gurung, Agni Sapkota and others had reached the TIA to welcome and receive Dahal.
#Pushpa Kamal Dahal #Transport #Nepal Communist Party (NCP) #Nepal-China transport transit #transit agreement #Nepal-China transport #Transport and transit agreement
You May Also like: