Substandard meat shops in the majority in Panchthar 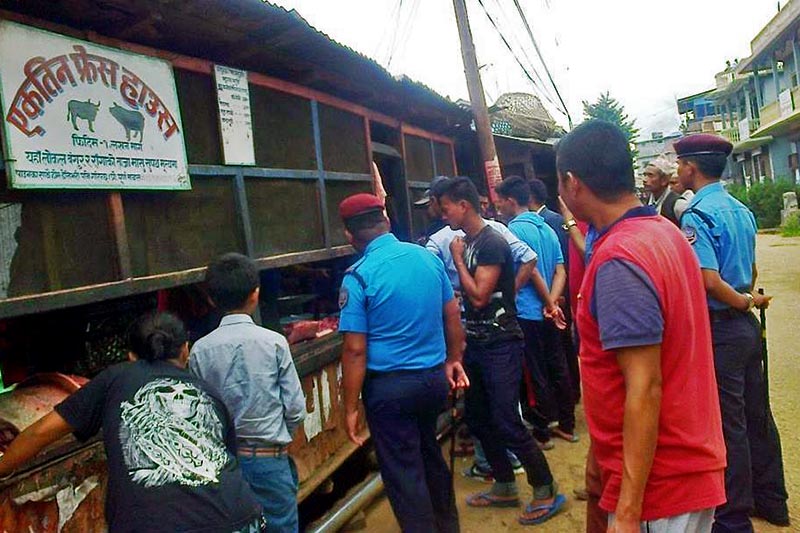 The monitoring team inspecting a meat shop in Phidim Bazaar of Panchthar district, on Wednesday, September 13, 2017. Photo: Laxmi Gautam
PHIDIM: The majority of meat shops in Phidim Bazaar have been found operating without any registration and proper maintenance. The Market Monitoring Committee, Panchthar found that most of the shops in operation were without any registration, signboards and price lists. Of the total 35 meat shops in Phidim, the district headquarters, only 13 shops are registered with the District Livestock Office (DLO), Panchthar. The team found the Salman Fresh House in poor state, without cleanliness, in Bhanunagar, Phidim Municipality-1. The store was found dirty with things littered hither and thither, according to the team coordinator and Assistant Chief District Officer Krishna Bahadur Basnet. He said that the cleaver and chopping board were covered with swarms of flies. Similarly, the shops in Lakhan Marg were found selling low quality meat not suitable for human consumption. Meanwhile, the shop owners have been granted time to improve and maintain the standard and quality as per the DLO. Assistant CDO Basnet said that stringent action would be taken against them if they fail to do so by the deadline. Most of the shops selling pork and buff have been given time to maintain proper management, informed Veterinarian Dr Bharat Shah. Two meat shops the Purwanchal Fresh House and the Kaka Fresh House have been found according as the standards, the monitoring team informed. The team monitored a total of 15 meat shops on Tuesday and Wednesday.
#Panchthar district #Phidim #Phidim bazaar #meat shops #Phidim unregistered cold stores #Unrtegistered meatshops
You May Also like: