KATHMANDU: Two persons were killed while at least 99 people were injured as a strong windstorm hit Kailali and Kanchanpur districts in Sudurpaschim Province on Thursday evening. 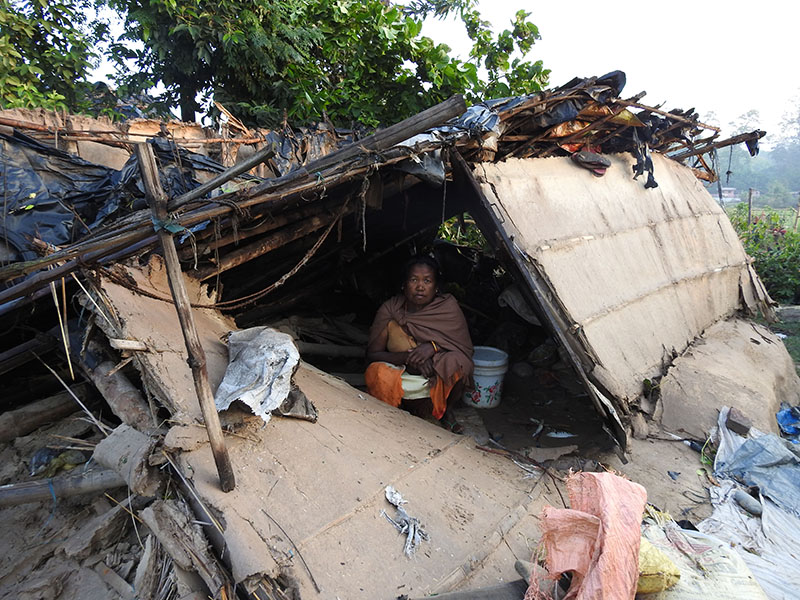 A local woman sitting inside a shed destroyed by the windstorm that occurred on Thursday evening, at Saalghari in Bhimdatta Municipality-18 of Kanchanpur district, on Friday, June 07, 2019. Photo: RSS

The deceased have been identified as Bir Bahadur Chaudhary, 26, of Godavari Municipality in Kanchanpur and Lahanu Dagaura of Tikapur Municipality-2 in Kailali, according to THT's local reporter Tekendra Deuba.

The storm hit several places in the two adjoining districts at around 7:30 pm, according to the National Emergency Operations Centre. Roads have been blocked as trees and utility poles were uprooted, while there was a power outage following the strong winds.

According to SP Giri, the windstorm caused major damage at Dhunge Bazaar area bordering the two districts. The storm lasted for nearly 40 minutes. “Most of the houses with zinc sheet roofs have been destroyed,” police said.

The storm that swept off the two districts has caused massive infrastructural damages and brought down houses of local people in hundreds, reported Deuba from the incident site.

A local woman sitting inside a shed destroyed by the windstorm that occurred on Thursday evening, at Saalghari in Bhimdatta Municipality-18 of Kanchanpur district, on Friday, June 07, 2019. Photo: RSS

Security personnel from Nepal Police, Nepal Army and Armed Police Force have been mobilised for rescue and relief operations.

Meanwhile, the Home Ministry issued an alert that the storm was gradually shifting towards the east. “The windstorm is now making its way towards Bardiya, Dang and areas further east. Stay safe, stay alert,” the NEOC’s twitter handle posted.