Upendra Yadav is a 'traitor':Begum 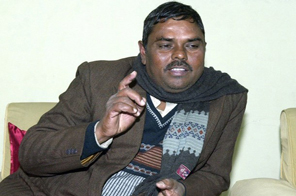 BIRGUNJ: On the backdrop of the present crisis in the party, leader of the Madhesi Janaadhikar Forum (MJF) and CA Member Karima Begum has branded party chairman Upendra Yadav a ‘traitor.’
Organising a press meet at her own residence in Birgunj on Monday, Begum held Yadav responsible for the party’s current crisis. She said the expulsion of seven senior leaders of the party including Bijay Kumar Gachhadar and Sharad Singh Bhandari was motivated by his own vested interests, adding that the split of the party has shattered the dreams of entire Madhesi martyrs.
Substantiating her argument that chairman Yadav had never been committed to Madhes causes, she said he spent more than seven months out of his nine months’ stay in the previous government as foreign minister, pushing the Madhes issues into oblivion. Now all of sudden he remembered the Madhesis’ issues just to deceive the people after he was out of power, she added.
She ridiculed the party’s decision to take action on the seven leaders. “There is no sense in taking action on the leaders who command majority in political and parliamentary committee of the party,” she reasoned. She sternly warned that chairman Yadav should improve himself before it was too late. She also revealed that Yadav had been making frequent telephone calls to lure her to his faction, adding that Yadav was crooked and corrupt person.
The MJF Parsa chairman Birendra Yadav and district working committee members were present on the occasion.

#Upendra Yadav is a 'traitor':Begum
You May Also like: