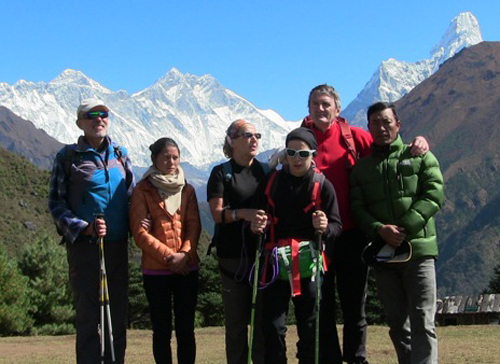 A group of Italian trekkers including visually impaired Burno Borrelli and Gabriele Scorsolini in Namche of the Everest region in October 2016. Photo: Stefani Gallo
SOLUKHUMBU: Burno Borrelli and Gabriele Scorsolini cannot see the outer physical world. But, the Italian nationals say that losing eyesight never stops them from doing things differently. Burno successfully trekked to the Everest pyramid (5,079 m) while Gabriele reached Tengboche (3,867 m) to extend a strong message to the world that courage and dedication could easily overcome the physical challenges. “It was really awesome to be in the Khumbu region that attracts the world,” the trekkers shared. According to them, they found everything like what other trekkers usually find in the mountainous region. Burno started his career in mountaineering in his 20s and climbed different peaks. “I completely lost my eyesight three years ago and the doctors have not yet found the ways to restore the same,” he said, adding that his both eyes gradually started suffering from an unknown ailment some 10 years ago. “Trekking guides – especially Sherpas – were so kind and helpful,” Burno said. Gabriele, who had also climbed the Monterosa massif, also reached the top of Punta Anna peak in Italy in 2015. “I had reached Tengboche and descended safely to Namche,” he said. Being the members of Italy-based Sport ABILI Predazzo, the duo hikers were equally strong as the other trekkers - Dino Alciati and Stefani Gallo – in the team, Usuelli Edward, leader of the trekking team said. “They have proven that nothing is impossible in this small world as you have courage and dedication.” he added. According to Nima Nuru Sherpa, Managing Director at Cho-Oyu Treks, the team managed locally by his company had left for Lukla on October 15 to begin trekking. “They completed the adventure in two weeks,” he said, adding that the courage Burno and Gabriele have always inspire others to overcome the physical challenges in their lifetime.
#Nepal trekking #Nepal tourism #Everest Base Camp #Mount Everest #Everest #Everest region #Namche
You May Also like: