13 countries meet in bid to save wild tigers 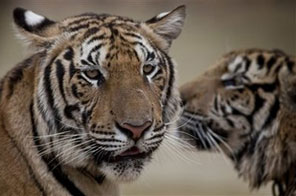 In this photo taken Jan. 20, 2010, two adult male tigers look on at Wat Pa Luangta Bua Yannasampanno Forest Monastery in Kanchanaburi, Thailand. The monastery and its Buddhist Monks dedicated to what has become a wildlife sanctuary for tigers. Estimates for the number of tigers in the wild has fallen in the past decade to somewhere between 3,600 to 3,200 according to the New York-based Wildlife Conservation Society. Many of the tigers at the Thai temple are the cubs of parent tigers that have been killed in the wild. Source: AP

HUA HIN: Efforts to save the wild tiger are at a critical point and it will take greater political will and cooperation from Asian countries to prevent the big cats from becoming extinct, conservationists and the World Bank warned Wednesday.

The dire message was offered to 13 tiger range states attending the first Ministerial Conference on Tiger Conservation. The aim of the three-day meeting is to convince countries to pledge to spend more on tiger conservation and set targets for boosting their numbers — vows that would then be finalized by heads of state in September at a meeting in Russia.

"There will be no room left for tigers and other wildlife in Asia without a more responsible and sustainable program for economic growth and infrastructure," World Bank President Robert Zoellick said in a video message to the 180 delegates.

"The tiger may be only one species, but the tigers' plight highlights the biodiversity crisis in Asia," he said.

Tiger numbers have plummeted because of human encroachment, the loss of more than nine-tenths of their habitat, and poaching to supply the vibrant trade in tiger parts. From an estimated 100,000 at the beginning of the 20th century, the number today is less than 3,600.

John Seidensticker, head of conservation ecology at the Smithsonian National Zoological Park and chairman of the Save the Tiger Fund, recalled how he watched the Javan and Bali tigers disappear in the 20th century, adding that "losing a tiger is like losing a very close, dear relative and I'm still saddened by that experience."

He said conservationists have over the years been successful in banning trade in tiger parts, outlawing hunting and boosting protection measures. But he said he and others never foresaw the breakneck economic development in Asia that would "pave over" key tiger forests and grasslands and create a market for tiger parts that has caused poaching to skyrocket.

Still, Seidensticker and others said the meeting itself offered hope, showing that the bid to save tigers has gone beyond passionate environmentalists and scientists and is now being embraced by government officials and key donors like the World Bank.

The meeting is being organized by Thailand and the Global Tiger Initiative, a coalition formed in 2008 by the World Bank, the Smithsonian Institute and nearly 40 conservation groups. It aims to double tiger numbers by 2022.

"That this meeting is happening is hugely important," said John Robinson, executive vice president of conservation and science for the New York-based Wildlife Conservation Society.

#13 countries meet in bid to save wild tigers
Stay in touch!