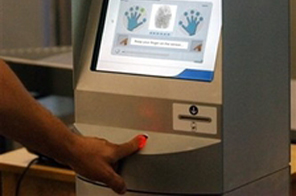 A 'verification kiosk' featuring fingerprint and iris scans is seen displayed at an airport in Minneapolis, US. Source: AFP

LONDON: Workers on London's Olympic Park will have to go through biometric scanning to access the 2012 Games site in a bid to protect it from terrorists, a newspaper reported Sunday.

From this week, machines that have hand and iris recognition technology will be deployed at entry points around the 2.5-square-kilometre east London site, The Observer said.
The weekly said the hand scanners could check up to 5,000 workers per hour at Europe's largest regeneration project, while the iris scanners would be used as an alternative if required.
The decision to implement the measures was based on Britain's "years of experience in both tackling terrorism and hosting major sporting and cultural events", Olympics Minister Tessa Jowell said.
"Ensuring the construction phase of the Games is safe and secure is a key part of our preparations for London 2012.
"We are using cutting-edge technology to make sure that as activity on the site increases the workforce and infrastructure continue to be protected without affecting progress."
Around 4,500 people work at the site but the figure is expected to double by the end of next year, The Observer said.
The scanners will also help clamp down on illegal labour.
Government figures found that 136 suspected illegal immigrants were arrested at the site between April and December last year, the latest period for which figures are available.
"We are phasing in robust plans to ensure the security and safety of both the Olympic Park workforce and the surrounding communities," said a spokesman for the Olympic Delivery Agency.
"Enhanced access controls utilising the latest technology will enable properly authorised, equipped and trained workers to enter and leave the Olympic Park as quickly and safely as possible."