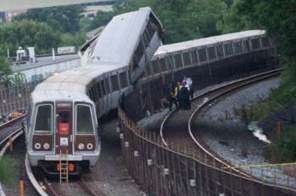 WASHINGTON: Hundreds of emergency responders from around the region rushed to the chaotic scene in the northeast section of the city where one train rammed into a stationary train from behind, compressing the rear car like an accordion before leapfrogging on top of it.

Mayor Adrian Fenty confirmed there were nine deaths in what he described as "the deadliest accident in the (33-year) history of our Metro train transit system."

The collision involving the six-compartment trains on an above-ground portion of the popular Red Line occurred at 5:02 pm (2102 GMT) near the Fort Totten Metro station.

Rescue teams were seen stretchering injured passengers down the tracks and using heavy equipment to cut through the carriages' outer shell in an effort to get to those inside the train, as emergency crews searched for more dead and wounded.

"We have to at this time continue to act and behave as a rescue scene," Fenty said.

With Washington just one day past the summer solstice, rescue workers took advantage of extended hours of sunlight as they searched for any additional bodies and injured passengers who may be trapped at the crash scene.

One of those who died was the female operator of the second train that rammed into the first as it awaited orders to proceed along the tracks, Catoe said.

"The next train came up behind it and for reasons we do not know plowed into the back of the train, he added.

"We are committed to investigate this accident until we determine why this happened and what must be done to ensure it never happens again."

National Transportation Safety Board (NTSB) officials were on the scene and had launched an investigation.

The mayor described a horrific crash scene, and posited that the rear train may have been traveling at considerable speed moments before the accident.

The rear car of the stopped train was "literally compressed to about one fourth the original size," Fenty said in an interview with CNN.

He warned that the death toll may rise as rescue crews struggle to pick through the mangled wreckage.

"We've got to literally cut open this compressed train," he said.

Dozens of stunned passengers, safely evacuated from the train, stood by the tracks close to the collision site, or were helped down off the other carriages by rescue workers. Some were limping and were clearly hurt.

For passenger Abra Jeffers, the crash was a harrowing welcome to the nation's capital, where he was heading home from his first day of work Monday.

Train passenger Jody Wickett told CNN she was texting a friend when she was sent hurtling through the air of the subway car.

"We felt like we hit a bump and about five or 10 seconds later, the train just came to a complete halt and we went flying," Wickett said.

"I went in there to try and help and (there was) debris and people pinned under and in between the two cars. We were just trying to get them out and help them as much as possible, pulling back the metal and whatnot," she said.

Metro carries an average of some 800,000 people a day, and is divided into five lines criss-crossing the city and traveling into the suburbs of neighboring states Maryland and Virginia.

But many Metro officials have been urgently calling for more funds to repair the aging system, warning it was coming under increasing strain.

The last major train crash in the United States was in September, when 25 people were killed when the conductor of a commuter train in Los Angeles was sending text messages on his mobile phone while at the train's controls.

#6 dead in US Metro train crash
Stay in touch!