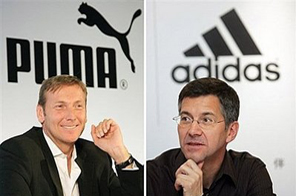 BERLIN: German sportswear giants Adidas and Puma are to settle on the football pitch a feud kicked off over 60 years ago by their founding brothers, a joint statement from the two rival firms said Friday.
The two companies were formed in 1948 after Rudolf and Adolf Dasslerfell out during World War II and split up their business -- once a provider of shoes to legendary US sprinter Jesse Owens.
The rivalry even divided the firms' home town of Herzogenaurach, a small town of 23,000 people in southern Germany, where Adidas and Puma have rival factories on opposite sides of the river.
But the bosses of both companies are hoping that the time-honoured tradition of a handshake and a game of football will heal the wounds from the rift in the former Gebrueder Dassler Schuhfabrik (Dassler Brothers' Shoe Factory).
Herbert Hainer, chief executive officer of Adidas, by far the bigger of the two companies said: "We are strongly convinced that sport can bring people together."
The match will take place between workers from both companies on Monday within the framework of the "Peace One Day" initiative, an annual day of global ceasefire and non-violence.