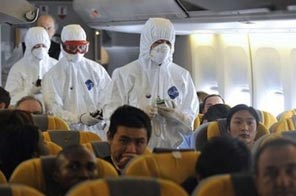 WASHINGTON: Airlines are stowing pillows and blankets, and rolling out the disinfectant wipes to discourage transmission of the swine flu virus, all the while stressing planes are as "safe" as trains or schools.
"The role of aircraft in spreading infection from one part of the world to the other is well established. The airplane is a vehicle for transmission," said William Schaffner, head of preventive medicine at Vanderbilt University medical school.
"I'm not sure that the companies can do very much. I think it's a very difficult situation," he said as the swine flu, which first hit Mexico hard, continued to harm a travel industry already hit by global economic woes.
More than 10 percent of flights between the United States and neighboring Mexico have been cancelled since September 2008, according to the Official Airline Guide.
Given the possibility they will welcome passengers who are feverish, coughing and contagious, airlines have no desire to play doctor -- but they are ready to stop a flight if necessary.
"Airlines do have an obligation to report incidents of suspected communicable diseases and airlines have the discretionary authority and follow well established procedures to deny boarding if they come across a medically unstable passenger with a serious communicable disease," said Victoria Day, spokeswoman for the Air Transportation Association.
In the United States, the Centers for Disease Control (CDC) sets the policy.
"Airlines are not medical experts, so we look to the CDC to provide guidance," Day said.
Some months ago the CDC recommended that "non-essential trips" to Mexico not be taken at that time, though they were not banned.
"We are not in the business of diagnosing customers for illness," Southwest spokesman Paul Flaningan said.
"Our crews are trained to respond to sick or infirm customers at the gate and in flight. We have access to medical personnel 24/7 to help us with customers who become ill and need immediate medical attention. If someone exhibits signs of illness before a flight, we will work with medical personnel to identify the appropriate course of action," he stressed.
Some carriers such as Southwest and Virgin America have dropped the use of blankets and pillows, at least on daytime flights.
"We've introduced antibacterial hand wipes, antibacterial gel on planes and at airports for crew and guest use," said Virgin America spokeswoman Patrica Condon, whose company also is offering masks for those who want them.
It is a precaution of moderate usefulness, experts say.
"The seats, and pillows and the blankets are really not very important in transmitting influenza," said Schaffner. And "the usefulness of masks is not well determined."
"It is really impossible to prevent the transmission a virus of the respiratory tract, because you cannot identify who is infected," he stressed.
Schaffer noted that in Asia, authorities have tried to take the temperature of people getting on planes to try to pick out people who are sick and might have a fever; it was attempted with SARS and H1N1.
"That's an interesting system, but it's very imperfect. The machines are not perfect," Schaffner said.
Airlines meanwhile stress that in-cabin air quality is nothing to sneeze at.
"The air inside an airplane is completely exchanged with outside air 10 to 15 times per hour. The air in the average office building is exchanged only once or twice per hour," the ATA stresses.
"We want people to understand that if you do travel there is no greater risk of traveling by air than there is going to school or work using public transportation," the association says.