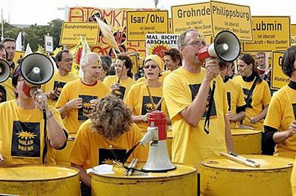 Anti-nuclear demonstrators stage a protest against the government's nuclear power policies in Berlin. The protesters are calling for the shutting down of Germany's nuclear power stations. Source: AFP

BERLIN: Some 50,000 anti-nuclear protestors on Saturday demonstrated here against Germany possibly reversing a decision to abandon nuclear power, and instead extend the life of its nuclear power plants.

The marchers, backed by 400 tractors, demanded that Germany stick to its commitment to close all nuclear plants by 2020 and also called for the closure of a radioactive dump at Gorleben in eastern Germany.

The police refused to give an estimate of the crowd but organisers -- ranging from the Greens to members of the Protestant church -- put the figure at 50,000 people, marching from the Berlin train station to the Brandenburg Gate.

Germany decided in 2000 under former chancellor Gerhard Schroeder's Social Democrats (SPD) and the Greens -- when current German leader Angela Merkel's conservative party was in opposition -- to mothball its 17 reactors by 2020.

The SPD is currently in coalition with Merkel's conservatives, but members of her CDU party want to look at extending the life of some reactors, which produce around 30 percent of German power.

This view is also shared by the party that Merkel wants to govern with after the September 27 elections, the pro-business Free Democrats (FDP).

Opinion polls indicate the two parties will attract enough votes to form such a coalition.

"The end of nuclearisation has been promised since a long time but up until now nothing has been done," said Jochen Stay, a spokesman for the march organisers.

Germany's Environment Minister Sigmar Gabriel, a Social Democrat, said Merkel's conservatives should "stop being the right arm of the nuclear industry," adding that "the future belongs to renewable energies."

According to a Greenpeace study released Saturday, 59 percent of Germans are opposed to extending the life of the nuclear plants, but it has not been a major issue in the election campaign.

Germany's stance on nuclear energy contrasts with its coming back in vogue in other countries because of high energy prices and also to lower harmful carbon dioxide emissions and reduce dependence on volatile oil and gas imports.