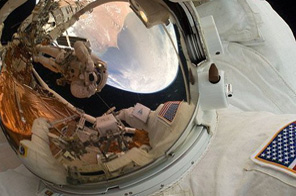 PARIS: Astronauts who have no history of bad headaches can be prone to disabling attacks while in space, a phenomenon that suggests "space headaches" deserve a medical category all of their own, neurologists said on Tuesday.
Contrary to prevailing theories, headaches in space are not caused by motion sickness, they said.
Instead, the problem could lie in an increase in blood flow to the head, causing painful pressure on the brain.
A team led by Alla Vein at the Leiden University Medical Centre in the Netherlands asked one female and 16 male astronauts aged from 28-58 who had stayed aboard the International Space Station (ISS).
Nine had taken part in short missions of 11 days on average, and eight had taken part in long-duration trips, averaging just under 202 days.
Twelve of the 17 astronauts reported 21 headaches. Nine headaches occurred during launch, nine during their stay at the ISS, one during a sortie outside the station and two during landing.
Two-thirds of the headaches were of moderate intensity, and most of the others were mild. Six percent were severe. One astronaut described feeling so unwell that the only solution was to roll up in a sleeping bag and spend most of the day sleeping.
But none of the astronauts had any history of recurrent headaches on Earth. All had been tested and found to be in excellent health before their flight.
In addition, none of the headaches appears to have been caused by motion sickness, whose symptoms are typically nausea, vomiting and vertigo. Only two of the headaches, both of them occurring during launch, matched international criteria for migraines.
Asked to describe the headache, the astronauts mostly said the symptoms were "exploding" or "heavy feeling." This chimes with previous research which shows that blood volume in the upper body is redistributed when a body floats in zero gravity, the doctors believe.
A shift of blood towards the brain could cause a painful increase in pressure within the skull, suggests the paper. Zero gravity is linked to inadequate oxygenation of the body, and this could also be a "plausible trigger," it adds.
Astronauts are traditionally reluctant to reveal all the physical complaints they experience in space, partly out of fear that this may prevent them from making future missions on medical grounds. In this case, the respondents were guaranteed anonymity.
The high number of reported episodes suggests space headache "is a common and often isolated, disabling complaint," says the paper.
It should be classified as a separate category among headaches attributed to "disorders of homeostasis," it believes. Homeostasis means the body's ability to regulate itself in response to changes in the external environment.
The study appears in the June issue of a specialist journal, Cephalalgia.