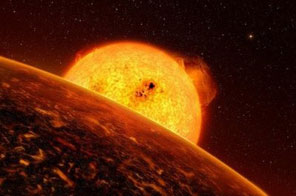 Artist impression released by ESO in 2009 shows the smallest and fastest-orbiting exoplanet known, CoRoT-7b (foreground), around a star named as CoRoT-7. US astronomers have detected the second smallest exoplanet ever discovered with a mass just four times heavier than the Earth, adding to a growing number of low-mass planets dubbed "super-Earths. Source: AFP

WASHINGTON: US astronomers have detected the second smallest exoplanet ever discovered with a mass just four times heavier than the Earth, adding to a growing number of low-mass planets dubbed "super-Earths."

"This is quite a remarkable discovery," said Andrew Howard, an astronomer at the University of California at Berkeley.

"It shows that we can push down and find smaller and smaller planets," he said in a presentation at the 215th meeting of the American Astronomical Society in Washington DC this week.

The exoplanet, a name given to planets outside our solar system, has been dubbed HD156668b, and is located around 80 light years from Earth in the direction of the Hercules constellation.

The planet orbits around its parent star in just over four days.

The smallest exoplanet previously discovered by astronomers was Gliese 581 e, detected by a Swiss astronomer in April 2009 some 20.5 light years from Earth in the Balance constellation.

But it orbits much closer to its star, making its temperature much higher than that on Earth.

Earlier this week, the scientific team responsible for the Kepler US space telescope -- launched in March 2009 to find planets similar to Earth outside our solar system -- announced at the same meeting their discovery of five new exoplanets.

Some 423 exoplanets have been identified by astronomers so far, according to specialist site exoplanet.eu, but none appear to be similar to Earth or capable of supporting life.

However, astronomers generally express confidence that either the Kepler telescope or the European Corot telescope will eventually find exoplanets like Earth.

John Morse, head of the astrophysics division at NASA headquarters in Washington, said it was "only a matter of time before more Kepler observations lead to smaller planets with longer period orbits, coming closer and closer to the discovery of the first Earth-analog."

The team of astronomers who discovered HD156668b used one of two Keck telescopes at the 4,145-meter (13,600-foot) summit of Mount Mauna Kea in Hawaii.

The astronomers used the so-called wobble method, which measures the gravitational effects of a planet on its star.

When the planet passes in front of its star it produces a slight change in the star's colour spectrum, shifting it towards blue.