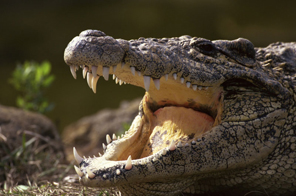 SYDNEY: An Australian man Tuesday described spending 12 hours clinging to a tree branch "like a koala bear" as crocodiles circled beneath him after his boat ran aground in the country's north.
Stan Martell said he climbed the tree after he fell asleep while out on a boat on the crocodile-infested Lynne River in the north of Western Australia state, and awoke to find the boat jammed under a tree and filled with water.
Martell said he spent Friday night in fear that the tree branch would break.
"I crawled up as high as I could, and just sat there like a koala bear all night," he told national broadcaster ABC.
He said he was "a bit wary about the crocs. I saw two crocs right where I was, one was a big one, and one was about 10 foot (three metres).
"I didn't want to go swimming anywhere, so I just sat there watching my boat and thinking, I can't believe this has just happened."
Martell said rescuers found him the next morning after he activated his satellite phone and emergency radio beacon.
Local police Sergeant John Kazandsis said while Martell only saw two crocodiles, "there would have been plenty more under the water."