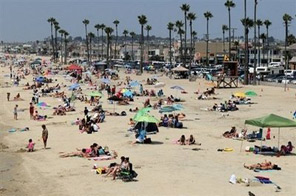 The so-called superbug MRSA, a multiresistant strain of staphylococcus usually found in hospitals, has been discovered for the first time on US beaches, a study said. Source: AFP

SAN FRANCISCO: The so-called superbug MRSA, a multiresistant strain of staphylococcus usually found in hospitals, has been discovered for the first time on US beaches, a study said.

The antibiotic-resistant strain, which is increasingly found in prisons, gym locker rooms and homes, can cause skin conditions and organ ailments and serious and sometimes fatal cases of pneumonia.

"This is the first report of MRSA (Methicillin-resistant Staphylococcus aureus) from marine water and inertial beach sand," said Marilyn Roberts, a microbiologist at the University of Washington in Seattle and co-author of the study, during a press briefing Saturday.

The study was presented on the first day of the 49th annual Interscience Conference on Antimicrobial Agency and Chemotherapy (ICAAC), which is being held in San Francisco this weekend.

The study describes the discovery of the MRSA strain on five out of 10 public beaches along the coasts of Washington and California, where researchers collected sand and water samples between February and September 2008.

Ordinary staphylococcus was found on nine out of the ten beaches.

MRSA was not found in the samples taken from the two California beaches, but the researchers said they did not believe that presence of the strain in Washington was an anomaly.

They said beaches could pose a transmission risk, making it easier for the virulent strain to spread.

Tests showed that the MRSA found on the five beaches was very similar to the antibiotic resistant type found most commonly in hospitals, Roberts said.

"We do not know the risk for any particular beach, but the fact that we found these organisms suggests that the level is much higher than we had thought," she said.

Roberts said the researchers found more organisms in the sand than in the water, explaining that this was likely because the sand acts as a filter for the sea water.

"I am not telling people not to go to the beach," she said, adding that simple precautions could help mitigate the spread of MRSA.

"Hygiene is always important and make sure you get all the sand off... and cover cuts and bruises on the skin," she said.

The study was among many being presented at the San Francisco conference, where papers on the A(H1N1) pandemic, HIV/AIDS and MRSA are top of the agenda.

"The ICAAC conference covers all infectious diseases, but in San Francisco, the flu, the pandemic flu A(H1N1), will be one of the key topics of the meeting" said Jim Sliwa, an ICAAC spokesman.

Among the studies being presented on the subject is one showing the effectiveness of using a combination of three anti-viral drugs that are usually used separately to treat resistant seasonal flu or the A(H1N1) virus.

Some 10,000 people are attending this year's ICAAC, around 8,000 of them scientists. Nearly 2,000 representatives from pharmaceutical laboratories are also attending, with around half of them from foreign countries, including Britain, France and Japan.