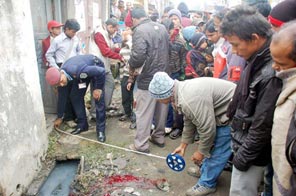 BIRGUNJ: A bodyguard of Parsa Assistant CDO, was shot dead at Ranighat 12, Parsa at 9: 45 am on Monday.
The deceased has been identified as Annanta Raj Khadkha, body guard of Assistant Chief District Officer Bal Bahadur Malla and a local resident of Saptari. He leaves behind a wife, daughter and son. He was residing in rented accommodation in Bhiswasa, Parsa.
According to Yadav Koirala, CDO of Parsa an unidentified group shot at Assistant CDO Balbahadur as he and Wagle got into a vehicle from his official residence. However, the bullet missed him and hit Khadkha instead.
He breathed his last while undergoing treatment at Narayani Sub Regional Hospital.
Malla sustained minor injuries in the incident but he returned home after a check up in the same hospital.
To protest against the attack all the officials from the government offices stopped work. The organisations of the civil workers and the Local Worker Association jointly stopped all work in their office demanding security for the government officials.
Unified Terai Mukti Morcha, an armed underground organisation has claimed responsibility for the incident by informing the local FM stations about it.
They alleged that their motive for the attack was due to the insincerity of the government in keeping its word following the talks held a year earlier.

Earlier the group had also killed Mohan Mainali secession officer of CDO office, Parsa at Ranighat a year ago.