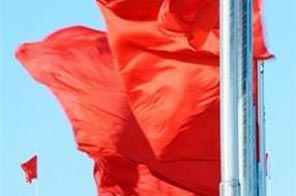 SHANGHAI: China's securities watchdog has resorted to investors' patriotism to help stabilise volatile markets, urging firms not to let diving stocks tarnish the 60th anniversary of the Communist Party's rule.
Brokerages and fund managers have been told their "top duty" was to protect social stability by helping the market keep an even keel, a memo distributed by the Shanghai branch of the China Securities Regulatory Commission said.
"A stable and safe capital market is related to vital interests of investors, stability of the economy and financial market and the overall situation of social harmony and stability," it said in the memo seen by AFP and dated Thursday. National Day takes place on October 1.
The notice was issued after the benchmark index slumped 6.74 percent on Monday, the biggest single fall in 14 months as concerns mount over slowing lending growth and a new share supply glut.
The market sank nearly 20 percent in the past month after hitting a 2009 peak of 3,478.01 on August 4. It had climbed 90 percent in the first seven months of the year.
Analysts have said policy decisions, rather than economic fundamentals or company balance sheets, are often the main drivers in the nation's stock markets.