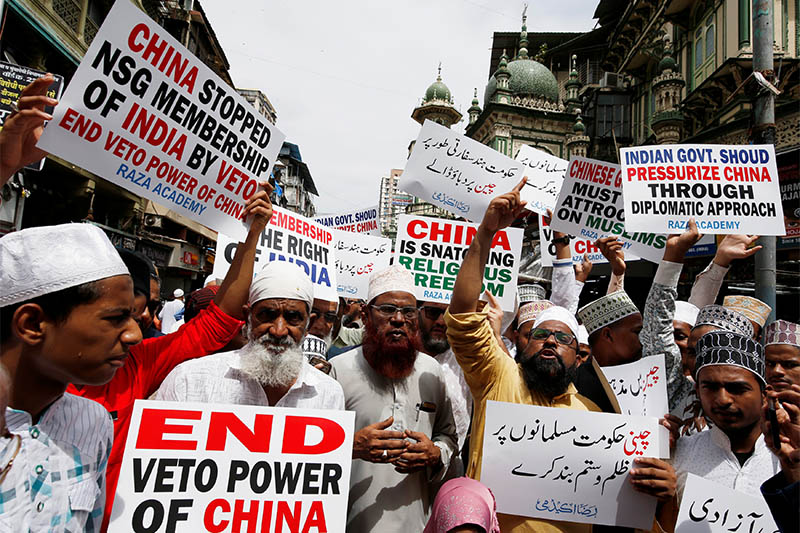 Protestors hold placards as they shout slogans during a protest against what they say is the Chinese government for detaining thousands of Uighur minority Muslims, at a street in Mumbai, India, September 14, 2018. Photo: Reuters
GENEVA: China is not mistreating Muslims in Xinjiang province but is putting some people through training courses to avoid extremism spreading, unlike Europe, which had failed to deal with the problem, a Chinese official told reporters on Thursday. Reports of mass detentions of ethnic Uighurs and other ethnic Muslims in China's far western region have sparked a growing international outcry, prompting the Trump administration to consider sanctions against officials and companies linked to allegations of human rights abuses. "It is not mistreatment," said Li Xiaojun, director for publicity at the Bureau of Human Rights Affairs of the State Council Information Office. "What China is doing is to establish professional training centres, educational centres." "If you do not say it’s the best way, maybe it’s the necessary way to deal with Islamic or religious extremism, because the West has failed in doing so, in dealing with religious Islamic extremism," Li told reporters on the sidelines of the UN Human Rights Council session in Geneva. "Look at Belgium, look at Paris, look at some other European countries. You have failed." China frequently comes under fire for its human rights policies. On Wednesday, it was accused by UN chief Antonio Guterres of reprisals against activists, including the alleged torture of a human rights lawyer. Critics say its surveillance in Xinjiang approaches martial law conditions . "As to surveillance, China is learning from the UK," Li said. "Your per capita CCTV is much higher than that for China's Xinjiang Autonomous Region." Europe's top rights court ruled on Thursday that Britain had violated privacy and free speech with a "Big Brother" electronic surveillance programme. Li said it was normal practice for Xinjiang police to use closed-circuit television for the public good, especially after ethnic riots in 2009, which were blamed on "foreign forces". He said the Xinjiang education centres were not "detention centres or re-education camps", which he dismissed as "the trademark product of eastern European countries", an apparent reference to Soviet Gulag detention camps during the Cold War. "To put it straight, it’s like vocational training ... like your children go to vocational-training schools to get better skills and better jobs after graduation. "But these kind of training and education centres only accept people for a short period of time – some people five days, some seven days, 10 days, one month, two months." He rejected the idea of having a UN expert visit the region, saying there was no need. He said the poorest people in remote areas were most susceptible to radicalisation, and that mosques were being used to that effect. Islam was a good thing in China's view, but Islamic extremists were the common foes of mankind, he said. "They are very bad elements. You can see that in Afghanistan, in Syria, in Pakistan, in Iraq, and many other countries."
#Muslim #Antonio Guterres #Xinjiang province
Stay in touch!