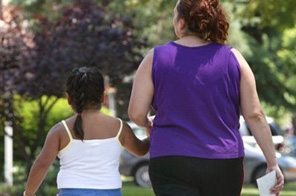 The WHO says 400 million adults around the world were obese in 2005 Source: AFP

TOKYO: Health experts have long warned of the risk of obesity, but a new Japanese study warns that being very skinny is even more dangerous, and that slightly chubby people live longest.

People who are a little overweight at age 40 live six to seven years longer than very thin people, whose average life expectancy was shorter by some five years than that of obese people, the study found.

"We found skinny people run the highest risk," said Shinichi Kuriyama, an associate professor at Tohoku University's Graduate School of Medicine who worked on the long-term study of middle-aged and elderly people.

"We had expected thin people would show the shortest life expectancy but didn't expect the difference to be this large," he told AFP by telephone.

The study was conducted by a health ministry team led by Tohoku University professor Ichiro Tsuji and covered 50,000 people between the ages of 40 and 79 over 12 years in the northern Japanese prefecture of Miyagi.

"There had been an argument that thin people's lives are short because many of them are sick or smoke. But the difference was almost unchanged even when we eliminated these factors," Kuriyama said.

Main reasons for the shorter lifespans of skinny people were believed to include their heightened vulnerability to diseases such as pneumonia and the fragility of their blood vessels, he said.

But Kuriyama warned he was not recommending people eat as much as they want.

"It's better that thin people try to gain normal weight, but we doubt it's good for people of normal physique to put on more fat," he said.

The study divided people into four weight classes at age 40 according to their body mass index, or BMI, calculated by dividing a person's weight in kilograms by their squared height in metres.