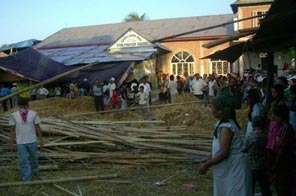 Residents gather after a temporary church made of bamboo collapsed in Dharan, some 200kms east of Kathmandu. Police said the church building collapsed during a Christian convention in eastern Nepal, killing at least 23 people and injuring dozens more. Source: AFP

DHARAN: A church building collapsed during a Christian convention in eastern Nepal, killing at least 23 people and injuring dozens more, police said Wednesday.
Around 1,500 Christians had gathered in the town of Dharan for the meeting when a makeshift three-storey structure built to accommodate participants gave way at about midnight after hours of heavy rainfall, they said.
"The participants were preparing to sleep when the wall collapsed. Most of the victims were on the ground floor of the building," police inspector Mohan Bikram Dahal told AFP.
"The wall was made of bamboo and it could not withstand the weight of the people."
Many of the dead were women and children and at least one of the victims was from neighbouring India, police said.
The El-Shaddai Church, an international Christian organisation with a base in the northern Indian town of Darjeeling, was holding its annual convention in Dharan, around 200 miles (320 kilometres) east of Nepal's capital, Kathmandu.
Police said many Indian Christians had travelled to the Zion Prayer House, a church in Dharan, for the meeting, and the bamboo structure that collapsed had been built to house the overspill.
Rescue teams were at the scene and the injured had been taken to hospitals in Dharan, police said, adding that the army had been drafted in to assist with the rescue effort.
"Sixty-three injured people are undergoing treatment in our hospital and five of them are in a critical condition," said Balbhadra Prasad Das, a doctor at the BP Koirala Institute of Health Sciences in Dharan.
"Most of the patients have head injuries and bruises."
Bhawindra Giri, a staff member at the El-Shaddai Church, said that the group was offering prayers for the injured and families of the dead.
There are around 500,000 Christians and nearly 3,000 churches in Nepal, which has a population of 27 million.
The first church was established by missionaries from Darjeeling in 1952 and the number of Christians grew rapidly as the country opened up to foreign influences.
However, Christians were subject to persecution and sometimes imprisoned during the Panchayat era, which began in 1960 when the then king Mahendra seized power and imposed direct rule that lasted for 30 years.
Accidents are common in poverty-stricken Nepal, where safety standards are lax and frequently ignored.