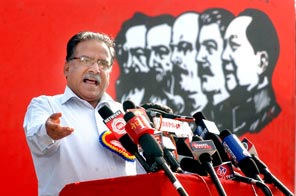 BIRTAMOD Chairman of UCPN-Maoist Pushpa Kamal Dahal said on Thursday that there is no alternative to a national unity government and drafting a new constitution in the given time frame.
Speaking to journalists in Birtamod, Jhapa prior to his programme of the Maoist party out-fit Limbuwan State Committee, in Illam, Dahal said that his party is in favour of a national unity government. He added that the international community has also supported the issue, therefore the national unity government would be formed soon under the Maoist leadership, since Maoists are the largest party. He clarified that the present agitation is not for forming a new government but for civilian supremacy.
He acknowledged the party folly in Dhunkuta and informed that he had instructed action to be taken against the culprits earlier. He also informed that the ongoing protest programme is under 99.9 percent control of the party.