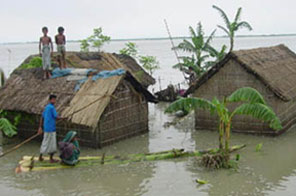 One of the most severe flooding occurred in 2004 in Banglades taking about 1000 lives. Source: Agencies

NEW DELHI: Tens of thousands of mobile users in Bangladesh's flood and cyclone-prone areas will now receive advance warning of an impending natural disaster through an alert on their cell phones, a government official says.

Bangladesh -- one of the world's most densely populated countries -- is highly vulnerable to natural disasters, including cyclones, storm surges, droughts, floods and earthquakes, which often affect millions of people.

In a bid to minimise loss of life and damage to property, Bangladeshi authorities have signed an agreement with two mobile operators in the country to provide disaster early warning alerts to subscribers.

Grameenphone and state-owned Teletalk will send instant messages to their subscribers in two of the most vulnerable areas -- flood-prone north-central Shirajganj district and cyclone-prone Cox's Bazar district on the coast.

"This new initiative will mean that people will get an alert on their phones warning them that they are likely to face flooding or a cyclone," Syed Ashraf, communications specialist for the country's Disaster Management Bureau, told Reuters by telephone.

"So they will then be able to take action like evacuate their homes and seek shelter in assigned places."

Bangladesh, with a population of around 162 million, has more than 46 million mobile phone subscribers.

Ashraf said the messages would not be the usual SMS format, but would flash automatically on the screen of mobile phone sets, instead of going to message boxes.

This way, people would not have to even push a button on their handsets, making it very user-friendly, he added.

Bangladesh is one of the riskiest countries in the world for natural disasters, according to a U.N. list published last week.

The country has an effective early warning system operated by the Bangladesh Red Crescent Society through its 42,000 volunteers who move around with bicycles and megaphones informing people of the impending danger and advising them to evacuate their homes.

But some of the more remote disaster-prone areas are not covered by volunteers and often villagers have no idea that their homes are likely to be flooded or that a severe cyclone is heading their way.

Officials say the new service aims to strengthen the existing early warning mechanism, reduce the number of people killed or injured and minimise loss of property.

The initiative will be piloted over the next six months with the intention of expanding it across the country.