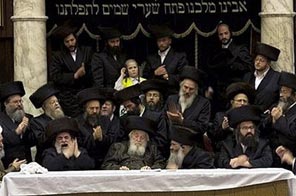 Ultra-Orthodox Jews belonging to the Vishnitz Hassidic sect gather around their Rabbi (C) as they celebrate the Jewish festival of Purim in March 2009 in Bnei Brak, a religious town near Tel Aviv. Source: AFP

JERUSALEM: Don't kiss the rabbi or the Torah scrolls: that is the message Israeli authorities are sending to the faithful in an effort to halt the spread of swine flu in the Jewish state, media reported on Friday.

In a message sent to synagogues ahead of the Jewish new year festivities, the health ministry said that handshaking is okay but only if one subsequently washes hands.

It is a common practice among some Jewish men to kiss respected rabbis on their hands.

On Friday, Israel reported a 22nd death linked to the A(H1N1) flu and said more than 3,000 people have been infected.