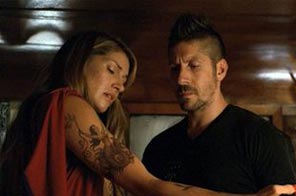 LOS ANGELES: In television's latest quest to discourage viewers from skipping ads, actors from NBC and ABC shows are appearing in character in commercials to interact with products in parallel story lines.

This new kind of commercial further blurs the line between program and advertisement and comes as traditional product placements within shows, an early response to fast-forwarding, have become common.

A series of spots that debuted this week weaves Palm Inc.'s Pre phone more deeply into the story line of two prime-time dramas.

In a "mini-mystery" called "Another Desperate Housewife," an extra from ABC's "Desperate Housewives" suspects her husband is cheating after checking his Pre. A voice-over refers to Sprint's wireless data network, as the phone is offered exclusively through Sprint Nextel Corp. in the U.S.: "This is suspicion, on The Now Network."

Along its eight-week run, a few dramatic twists and turns will be revealed — over the phone, of course.

Sprint also has a "Heroes" series of dramatized ads on NBC that follows new character Lydia, who is able to identify faces in the shape-shifting tattoos on her body. She uses the Pre to find her daughter, who also has a heroic power.

"It's definitely groundbreaking for ABC and NBC," said Denise Ocasio, managing partner of MindShare, the marketing firm that helped Sprint create the spots. "It's not a commercial. It looks and feels and has all the drama and excitement of the show. It is an entertainment experience. It's just brought to you by Sprint."

But not everyone is pleased. Peter Horton, executive producer of the short-lived NBC drama "The Philanthropist," said he would hesitate to have another such ad on one of his shows.

He said a dramatized vignette featuring the assistant and bodyguard of the show's main character using Microsoft Corp.'s Bing search engine to look up things online was confusing to viewers because it sometimes introduced a competing plot line.

"I understand the desire financially by networks and producers," Horton said. "I do think it's at the expense of the viewing experience, I really do."

Microsoft was happier with the results. Danielle Tiedt, a marketing general manager at Microsoft, said the ads did "a great job" of boosting understanding and awareness of Bing.

Networks want to convince advertisers that coupling such creative shorts with a fleet of traditional ads improves the effectiveness of the commercials at a time marketing budgets are being slashed.

Such innovation is critical as more consumers fast-forward through ads, easily accomplished with digital video recorders.

"It's a different environment and the rules have changed and we have to change with them," said Alan Wurtzel, president of research at General Electric Co.'s NBC Universal.

When DVRs, and thus ad-skipping, started gaining popularity, there was a sense that broadcasters were doomed, Wurtzel said. But people still watch TV commercials, as long as they're not bad, irritating or repetitive.

Another development two years ago also gave broadcasters the push to keep audiences tuned in during commercials: Instead of basing ad rates on a TV show's audience ratings, they were set on the number of people watching commercials.

"As a result, cable and broadcast companies are much more interested in making sure they maintain as much of the audience in the commercial break as much as possible," said David Poltrack, chief research officer at CBS Corp. "That is creating a lot of integrated advertising."

CBS has run its own version of integrated commercials that refer to a show's developments. Last fall the network ran a series of vignettes featuring Lara Spencer, the host of "The Insider," during its Monday night comedy block. As she cooked with Bertolli Italian food products, she talked about plot twists in the shows.

The plots in such hybrid ads, for now, aren't integral to the main story line, and viewers still could easily skip them without losing anything. In a sense, it's much like Web shorts and cell-phone "mobisodes" meant to sustain interest among die-hard fans without alienating viewers who only tune in to prime time.

In audience surveys conducted by Nielsen IAG, hybrid ads that incorporate some kind of content from the surrounding show are, on average, better remembered. However, they are more powerful when used in combination with a traditional ad, which drives purchases with discount information and buying instructions.

"The traditional ad is really still doing the heavy lifting of getting the benefits of the brand across," said David Kaplan, senior vice president of research at Nielsen IAG.