Drugs as good as heart surgery for diabetics 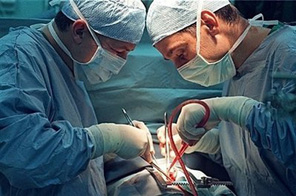 Doctors perform heart surgery. Drugs are just as good as prompt bypass surgery or angioplasty to open blocked heart arteries for diabetics with stable heart disease, according to US researchers. Source: AFP

WASHINGTON: Drugs are just as good as prompt bypass surgery or angioplasty to open blocked heart arteries for diabetics with stable heart disease, according to US researchers.

The study, unveiled on Sunday, also found that quick bypass surgery in patients with more severe heart disease did not decrease their mortality but lowered their risk of later major cardiac events.

"In combining the two revascularization approaches, we found that prompt revascularization did not hold any advantage over intensive medical therapy alone with regard to total mortality," said Trevor Orchard of the University of Pittsburgh, which led the study published in Thursday's issue of the New England Journal of Medicine.

But Orchard also noted in a statement that "prompt coronary artery bypass surgery, compared to intensive medical therapy alone, had significantly better outcomes when cardiovascular events were considered in addition to death."

A major part of that benefit involved a reduction in non-fatal heart attacks, which the study noted had never been shown before with bypass surgery.

Nearly 24 million Americans suffer from diabetes, a disease linked to high blood glucose levels due to difficulties in the body's ability to produce or use insulin.

The study, which was presented at an American Diabetes Association meeting in New Orleans, involved 2,368 patients with both type 2 diabetes and stable heart disease who were randomized to receive both drugs and prompt revascularization treatment or only drugs.

Angioplasty opens blocked arteries by inserting metal stents or balloons through the arteries.

The results found no significant difference in survival, heart attack or stroke rates after five years, with an 88.3 percent survival rate for the group receiving either bypass surgery or angioplasty, compared to 87.8 percent for the drug therapy group.

However, patients with more severe heart disease who underwent bypass surgery "seemed to do particularly well on insulin-sensitizing drugs," said Robert Frye of the Mayo Clinic College of Medicine and chairman of the study.

But he cautioned that the result was "preliminary because we did not set out to answer this question with our study design."

The results of the study, which was funded in part by the drugmaker GlaxoSmithKline and conducted at 49 clinical sites in the United States and abroad "reassure us that our current major drug treatments for diabetes are equally appropriate" as revascularization, said Saul Genuth of Case Western Reserve University.

For patients with type 2 diabetes who have more sever heart disease "it may be better to do bypass surgery early than to wait and simply treat with medication," Genuth said.

But for patients with milder heart disease considering angioplasty, "it is appropriate to treat with drug therapy first," he added.

#Drugs as good as heart surgery for diabetics
Stay in touch!