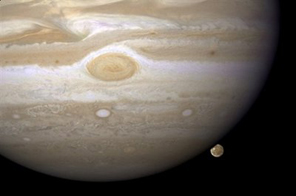 In this 2008 image released by NASA, the Hubble Space Telescope has caught Jupiter and its moon Ganymede (bottom right). Source: AFP

PARIS: Astronomers on Wednesday described a dwarf planet orbiting in the far, frozen reaches of the Solar System and unveiled a geological map of Ganymede, an icy satellite of Jupiter.

Space scientists were to provide the most detailed snapshots of these elusive objects at the European Planetary Science Congress in Potsdam, on the outskirts of Berlin.

Observers led by Pedro Lacerda of Queen's University, Belfast, used a giant infra-red telescope atop a mountain in Hawaii to get unprecedented views of a frozen mini-world called Haumea, first spotted in 2005.

Known as a dwarf planet, Haumea distantly orbits the Sun in a region beyond Neptune known as the Kuiper Belt.

It is the fourth largest-known object in the belt, after Eris, Pluto -- once a planet but controversially downgraded in 2006 -- and Makemake.

Haumea spins at an extraordinarily fast rate, apparently the result of a massive impact with another space object more than a billion years, Lacerda said in a press release.

Despite the spin, Lacerda found an intriguing dark red area on Haumea's bright white surface, indicating an area rich in minerals and organic (carbon-rich) compounds, or possibly a higher proportion of crystalline ice.

Spectrometry observations next year, using European Southern Observatory's new Very Large Telescope, could spell out the composition of the spot, thus revealing more about how Kuiper Belt objects were formed.

The map is only the third to give a complete image of the surface features of a satellite. Earth's Moon and Callisto, a cratered companion of Jupiter, have previously been mapped.