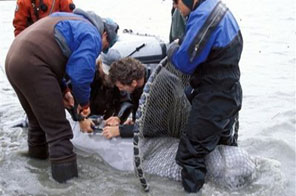 ANCHORAGE: A government study found that a group of endangered beluga whales in Alaska is declining, raising concern that bolstered protection for the animals is not coming quickly enough.
The downward trend comes after two years where numbers for the Cook Inlet belugas appeared to have stabilized. But now numbers have slipped again to 321 animals, down from an estimated 375 animals in 2007 and 2008, according to figures released Tuesday by the National Oceanic and Atmospheric Administration.
The Cook Inlet whales, which swim mainly off Anchorage, are considered a genetically distinct population and don't mix with the other four beluga groups in Alaska.
The lower number in 2009 underscores the need for NOAA to act more aggressively to reverse the decline and save the whales from extinction, said Brendan Cummings, oceans program director with the Center for Biological Diversity, a group that has used legal pressure to try and get more protections for Cook Inlet belugas.
Cummings said one year after the listing and there is no critical habitat designation and no recovery team or recovery plan in place. But, he said, it is not too late to save Cook Inlet's belugas if the federal agencies put their best efforts into protecting them and the state removes obstacles to their recovery.
"It has to start very soon or each year we will see fewer and fewer belugas until one day we will see no more at all," he said.
Barbara Mahoney, a biologist with the National Marine Fisheries Service in Anchorage, said a critical habitat proposal will be issued this month and a recovery team is being put in place.
Scientists do not know why Cook Inlet belugas have declined. Overharvesting by Alaska Natives is believed to have contributed but numbers continued to decline even after hunting was sharply curtailed in 1999. There has been no subsistence hunt for the past three years. None is planned for the immediate future.
There were about 1,300 Cook Inlet belugas in the 1980s but numbers had declined to an estimated 653 in 1994. Numbers reached an all-time low of 278 in 2005. Alaska's other four beluga groups are not endangered and number thousands.
The Cook Inlet belugas were listed last year as endangered, a move that was opposed by the state over concerns about what a listing would do to the state's economy. Cook Inlet is an economic hub.
The federal listing requires the designation of critical habitat, a recovery plan and a review of activities in Cook Inlet.
Given the economic importance of Cook Inlet, Mahoney said the agency conducted an economic analysis, looking at such things as the expansion of the port, shipping, tourism, military installations, commercial fishing and oil and gas exploration.
Officials have said the listing does not mean that development in Cook Inlet will stop, only that it will h